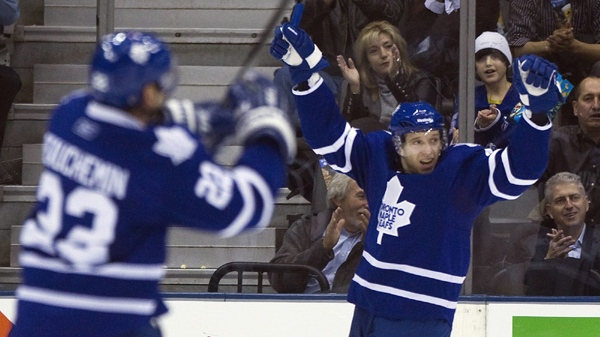 TORONTO - It doesn't matter to Clarke MacArthur what language his linemates speak as long as they keep producing like this.

Nikolai Kulemin took his turn in the spotlight for the Toronto Maple Leafs on Monday, scoring twice in a 4-1 victory over the Dallas Stars. He and fellow Russian speaker Mikhail Grabovski have found an unlikely chemistry with MacArthur, and they now account for the top three spots on the team's scoring chart.

They've really hit it off since being put together in training camp.

"At the start of the year you'd never have expected us to click like that," said MacArthur, who leads the Leafs with 18 points. "I just feel like we all have a good little quality and we're hungry every night -- that's the biggest thing. I've played on lines where some nights we're taking nights off, and these guys are bugging me every day to go to the morning skate's when they're optional.

"They've been pushing me and I've been trying to push back."

Coincidentally, the only other multi-goal performance of Kulemin's 171-game career came last year against the Stars. He now has seven goals on the season, tying him for second on the team with MacArthur.

Even though that line is generally considered Toronto's second scoring unit, it has been more consistent than the top line, which has seen different players rotate in and out with Phil Kessel and Tyler Bozak.

Among the things MacArthur has done to try and build chemistry with his Russian-speaking teammates is joining them for a meal during a recent road trip through Florida.

"We went out to dinner the other night and there wasn't much said for me," said MacArthur. "I was just kind of sitting there. The two of them talked and I sat there."

Tyler Bozak and Kris Versteeg had the other goals for the Maple Leafs (8-9-3), who got 21 saves from Jonas Gustavsson.

Gustavsson continued his strong play in relief of J.S. Giguere, who has missed three games with a minor groin injury. The Leafs backup has stopped 87 of 91 shots during that stretch.

"The more I play, the more experienced I get," said Gustavsson. "I feel in great shape right now and that's positive."

All the offence he needed on Monday came off Kulemin's stick.

He opened the scoring while doing something coach Ron Wilson has been preaching all season -- standing in front of the net. Luke Schenn's point shot was tipped by both Grabovski and Kulemin, leaving Kari Lehtonen with little hope of stopping the puck at 10:52 of the first period.

That wasn't the case on Kulemin's second goal. The Stars goaltender let out a juicy rebound before he buried his second chance at 14:05 of the middle period.

"It's not always elegant with Kulie," said Wilson. "He's got a lot of rough edges but he's hard to play against because he's so big and strong."

Richards made it 2-1 before the end of the second period, one-timing a shot past Gustavsson after teammate Steve Ott made a nice play to carry the puck around the net and found him with a backhand pass.

"It wasn't pretty tonight," said Richards. "They pressured us and we didn't handle it very well. We weren't really in the game."

Toronto restored its two-goal lead before the second intermission when Nazem Kadri picked up his fourth assist in five games this season. The Leafs rookie found Bozak, who beat Lehtonen high at 17:07 of the second period for his first goal in eight games.

Even though Kadri is still searching for his first NHL goal -- he had a nice chance denied in the third period -- the team has started scoring more since he was called up from the AHL on Nov. 12. The Leafs have gone 3-2-0 with 15 goals during that five-game stretch.

It hasn't gone unnoticed by his coach.

"He's still young but he's producing just about every game," Wilson said of Kadri. "He's creating scoring chances and paying attention and trying to do things defensively. ... If his play falls off, he may need some more seasoning in the minors.

Kessel felt some of Wilson's wrath after failing to cover Richards on the Dallas goal. The coach benched him for the rest of the period, which is why he only played 15:05 in the game, his second-lowest total since joining the Leafs last season.

"He didn't backcheck on the goal," said Wilson. "Message sent, message received. He played hard in the third period."

Notes: Toronto used the same lineup for a third straight game ... Leafs captain Dion Phaneuf sat out a ninth game since suffering a deep cut to his right leg ... Dallas forward Loui Eriksson has played 235 straight games dating back to Dec. 7, 2007 ... Richards, a pending unrestricted free agent, on rumours the Leafs may try to trade for him this season: "When the time comes, if that's an option, Toronto is always a No. 1 hockey destination. It would be great being a Canadian playing in Toronto, but we're not even close to that bridge yet." ... Announced attendance was 19,266.