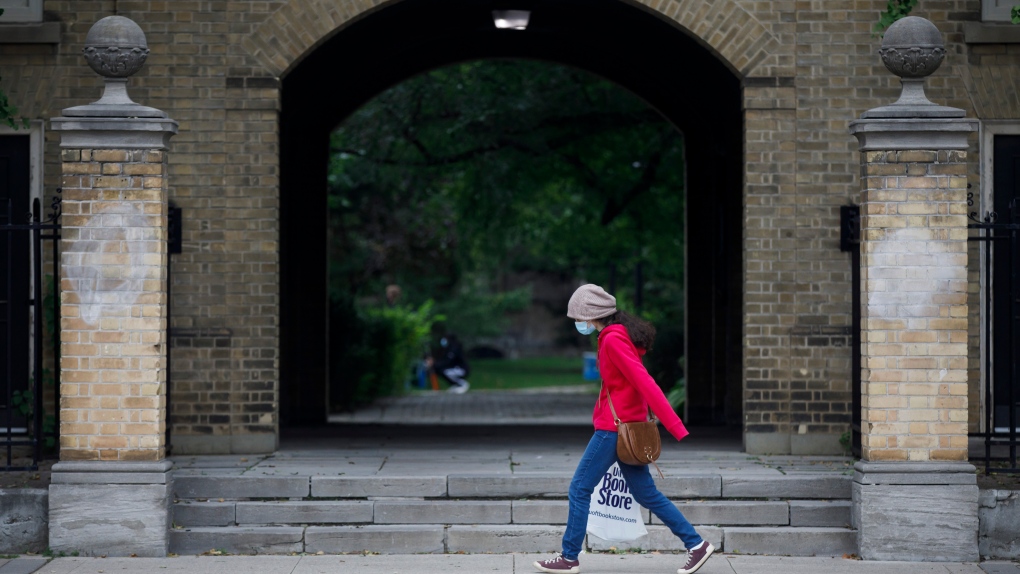 TORONTO -- University of Toronto students are opening up about their mental health struggles in hopes it will prompt institutional changes within the administration amid the COVID-19 pandemic.

People are publicly sharing their mental health experiences with an online community of former and current U of T students.

“The mental health situation was a problem on campus before the pandemic began, and will still be a problem after the pandemic unless institutional changes are made,” said Maddie Diab, a recent U of T graduate.

The university’s media relations office said in an email that student mental health remains a top priority as the school is experiencing a “significant” increase in demand for mental health support services.

“We have increased investments in base funding for mental health programs and resources by 40 per cent over the last three years. This has included hiring 23 new counselors across the three campuses, and providing access to 24-hour support for all students in multiple languages,” said Micah Stickel, University of Toronto’s acting vice-provost.

Despite the investments that the university is making to its existing mental health services, it is still not enough to create the institutional changes needed to address student mental health, according to current U of T student Jan Lim.

The fourth-year anthropology student is conducting an independent review of the university’s health services by studying patterns in more than 100 U of T student testimonies. Lim’s investigation consists of analyzing commonalities among students’ experiences in order to draw a conclusion. Her ultimate goal is to present her findings to the school faculty.

“I feel a sense of urgency when it comes to helping to show that this is a systemic issue at U of T that I want to expose before I graduate this year,” said Lim.

Lim is accepting online submissions from current and former U of T students until the end of December . She and her research partner Loizza Aquino will review each submission before including it in their research.

Their review consists of interviewing the current or former student, and doing a background check. All of her participants have U of T credentials or a record of an encounter with the school’s mental health administration.

They have received more than 100 testimonies anonymously published online. Lim’s research will be available online.

Students’ personal experiences vary from waiting months to get adequate consultation to sometimes being outright denied counselling services altogether, according to the testimonies.

“By investigating these things, I will be able to illustrate how the mental health crisis at this school is a systemic issue that’s perpetuated by the university’s admin and internalized by students,” said Lim.

Since 2018, there have been five reported U of T student suicides, three of which occurred at the same building -- the Bahen Centre for Information Technology.

While on-campus mental health facilities are normally available to students during the regular school year, those services have moved to an online mental health resource where students can find phone, video and face-to-face mental health services. App services are also available for free counselling support.

On Nov. 23, the Centre for Addiction and Mental Health (CAMH) published a study that revealed one in six students between the grades of 7 and 12 have had serious thoughts about suicide. his means students have already considered suicide before even attending post-secondary studies.

One in five students (21 per cent) reported serious psychological distress, almost double the rate it was just six years prior. By the time these students arrive to university, they likely already have pre-existing mental health conditions.

“Educational institutions are critical pieces to student mental health and well-being. From a societal perspective, we’ve lost our way in terms of what we expect of young people,” said Dr. Joanna Henderson, a psychologist and director of the Margaret and Wallace McCain Centre for Child Youth and Family Mental Health at CAMH.

She said the pressure of being accepted into a good university mounts throughout high school and it translates into adolescence. For some students, the path to a post-secondary education is stressful and it can take years.

Since the CAMH study predates the COVID-19 pandemic, researchers expect that the lockdown will only make mental health more challenging for students.

“When students are placed in such an academically rigorous and competitive environment, they don’t know the extent the psychological effects it may have on them,” she said.

Although some mental health services are available to students, she said the services alone are not enough of a solution.

“The decision to pursue those services aren’t always successful the first time and it takes time and energy to do those things. It takes a lot of psychological energy to pursue services, and the services in many places – not everywhere – aren’t as always accessible.”

A mental health professional can’t solve problems that happen within the university classroom such as being disciplined for late assignment submissions, Henderson explained.

“We need to rethink how we institutionalize threats to mental health – it’s a huge issue,” she said.

Lim defines institutional changes as accommodations for students and more lenient classroom policies, such as late submissions. She also suggests more power for academic advisers when advocating for students.

There is currently a student mental health taskforce at the university, however, its power is limited to making recommendations.

Henderson said a common misconception about mental health is that it is either obvious or it is an isolated incident.

“Everyone knows someone who is probably at this moment struggling and this is not another (person’s) problem -- this is an everyone problem,” said Henderson.

As for Lim, her long-term goal is to present her findings to the university and hopes it will encourage institutional change.

Lim believes it is possible to reach a point where students can succeed academically without mental-health barriers.

If you or someone you know is in crisis, here are some resources that are available.

If you need immediate assistance call 911 or go to the nearest hospital.