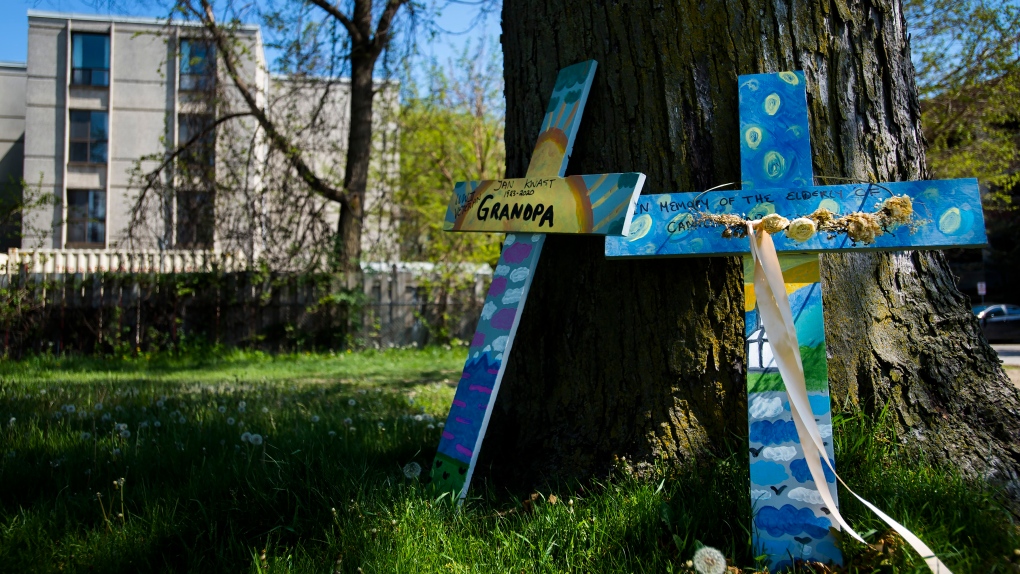 TORONTO -- Several unions launched a campaign on Thursday calling on the Ontario government to phase out for-profit companies that operate long-term care homes.

COVID-19 has hit for-profit homes harder than their non-profit or municipally run counterparts, they noted.

"It's proven: For-profits have the worst outcomes in this pandemic," said Sharleen Stewart, president of Service Employees International Union Healthcare representing frontline workers in the province. "It's glaring. The for-profits are the ones with the problems."

For-profits account for just over half of Ontario's more than 620 nursing homes but are also in place across Canada. COVID-19 has been especially brutal for the money-making enterprises, with 13 of the 15 hardest-hit facilities in the province run by for-profits.

In support of their campaign, the unions launched a one-minute TV commercial that says the novel coronavirus has killed 1,800 residents in Ontario care homes.

Many of those who died were in overcrowded and squalid conditions, while staff lacked proper personal protection equipment, the ad says.

"They died while private LTC corporations chose profits over people, paying out shareholders $58 million in the past three months."

That money, the unions said, should have been used to increase staff wages and full-time employment, enhanced infection controls, and air conditioning.

Premier Doug Ford, who has previously said a commission would be reviewing the sector, said on Thursday that "Everything is on the table."

Jerry Dias, national president of Unifor, took aim at former Progressive Conservative premier Mike Harris, now chairman of the board at Chartwell, a key player in long-term care. It was the Harris government that deregulated the industry two decades ago, Dias said.

"The fact that he himself is personally profiting from that today is a disgrace," Dias said.

The former premier did not comment on Dias's claims, but Chartwell said newer homes with better COVID outcomes were the result of the 20,000 new long term care beds and the redevelopment of 16,000 others the Harris government announced in 1998.

"Mr. Harris's government added much needed additional capacity to the long term care system and helped ensure a significant portion of buildings were able to be redeveloped to modern standards," Sharon Ranalli, a Chartwell vice-president, said in a statement.

In all, Ranalli said, the added capacity under Harris accounts for 45 per cent of today's beds.

Chartwell also said the government controls 100 per cent of revenue, and no profit can be generated from government funding for resident care and services.

"What is not spent on care and services is returned to government," Ranalli said. "Return on invested capital in long term care homes can only be generated through accommodation revenue sources, which are also set by government."

The unions said it would take time to phase out for-profits, saying it could be done when contracts expire. It would also require more beds in non-profit and municipal homes and an infusion of cash from both the provincial and federal governments.

"It's going to take an incredible amount of political will," said Candace Rennick of CUPE Ontario. "But the lives of our loved ones are worth it."

A study of Ontario's 623 long-term care homes published this week in the Canadian Medical Association Journal concluded for-profit homes had more severe outbreaks and more deaths due to COVID-19 than their not-for-profit counterparts.

The Ontario Long Term Care Association said everyone needs to work to stabilize the sector ahead of a possible second wave of COVID-19, and called on the government to address the sector's systemic issues that contributed to severe outbreaks.

This report by The Canadian Press was first published on July 23, 2020.