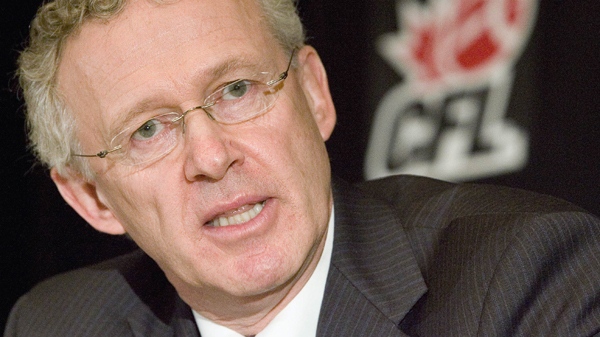 TORONTO - Looking to further mine already fertile ground in Canada, the UFC is opening an office in Toronto with former CFL commissioner Tom Wright at the helm.

"Thank you for coming to the 'We love Canada' press conference," UFC president Dana White said in kicking off proceedings on a dais decorated with six Canadian flags.

The UFC sees Canada -- which White has dubbed "the mecca" of mixed martial arts -- as its second biggest market outside of the U.S., accounting for some 17 per cent of its overall business.

While Ontario continues to resist sanctioning the sport, the UFC denied opening a Toronto office was a symbolic move.

"It makes sense to be here from a business standpoint," said co-owner Lorenzo Fertitta.

Added White: "It's got to the point where Canada is so big and continuing to grow, it was time. It's probably overdue. . . . To not have an office here is insane."

The UFC has held three successful shows in Montreal and is making its debut in Vancouver next month. UFC 115 at GM Place sold out just 15 minutes into a pre-sale for fan club members, erasing the UFC record set by the first Montreal show, UFC 83.

World Extreme Cagefighting, the UFC's sister company, is making its Canadian debut in Edmonton next month.

Wright will be the Canadian point man for what Fertitta called "truly the fastest-growing sport ever."

Wright starts his new job Monday and the UFC expects the Toronto office will eventually grow to about 12 to 15 employees -- the same as its United Kingdom branch. In total, the UFC has 150 to 160 employees, which is pretty sleek for what Forbes magazine called a billion-dollar business back in 2008.

"At a time when the economy is bad for everybody, people are losing jobs and people are getting laid off, we're going the other way," White said. "We're creating more jobs, we're hiring more people."

Tuesday's news conference was held at the Rogers Centre, where the UFC hopes to hold a show some day. Rogers, as a cable operator with an interest in the pay-per-view provider Viewers Choice, is already on board.

When the UFC does come to Ontario, "we think we're going to sell more tickets here than we have anywhere. This is a very hot market," said White.

The UFC is considering holding Canadian Georges St-Pierre's next welterweight title defence, against Josh Koscheck, north of the border, possibly in conjunction with a two-day UFC Fan Expo.

Wright will be charged with growing the UFC brand in Canada, from increasing business opportunities from new media to video games to developing Canadian fight talent.

The UFC is particularly keen to bring its brand of gyms to Canada. One is currently open in California with some eight more on the way.

Fertitta said the UFC brought Wright down to Los Angeles in October for the UFC 104 bout between Lyoto (The Dragon) Machida and Mauricio (Shogun) Rua for their first discussions. That eventually led to the job offer. Wright's official title is director of Canadian operations.

According to Fertitta, Wright brings "a unique blend" of business and sports experience.

"Look at his resume, the guy's a stud," said White, who spent about three hours in Toronto on Tuesday before heading to New York for an appearance on "Late Night With Jimmy Fallon."

Wright ran Adidas Canada for 11 years, was president and CEO of Salomon North America for two years, and served as CFL commissioner from 2002 to 2005. Most recently he was managing director and brand adviser for Toronto-based Level5.

"It is sport, it's great sports, wonderful entertainment, but it is a business," he added.

As for opening Ontario up to the sport, UFC regulatory guru Marc Ratner says lobbying continues with both the federal and provincial governments. The UFC is seeking to have Ottawa expand the Criminal Code exemption for boxing to include mixed martial arts.

Should that happen, the UFC would still look to have Ontario officially sanction the sport, however, since the government-run Ontario Athletic Commission would be in charge of regulating MMA.

Ontario and New York are essentially the only North American jurisdictions yet to open the door to MMA, with New York seemingly ready to embrace the sport once a budget impasse is solved in the state legislature.

Fertitta called the Ontario resistance "a little bit" frustrating, but said it was only a matter of time before the sport was accepted.