Crews remained on-scene late into the night Monday following a trench collapse that injured four workers at a construction site in Ajax.

The incident happened at around noon, on the roadway, near Rossland and Westney roads.

Ornge said their patient was a man in his 20s. He was taken to Toronto's Sunnybrook Health Sciences Centre with serious injuries, they said.

Another male victim was taken to a local hospital, Sgt. Joanna Bortoluss, of Durham Regional Police Service, told members of the media at the scene.

The extent of his injuries are unknown at this time.

Bortoluss said two other workers remain trapped in the trench. 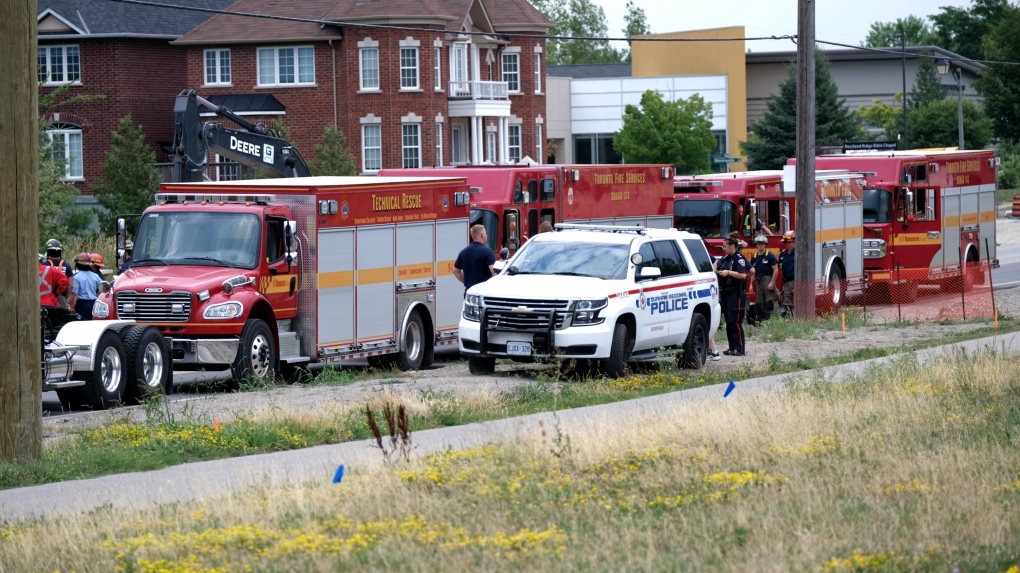 Emergency vehicles are pictured at the scene of a trench collapse in Ajax Monday August 8, 2022. (Simon Sheehan /CP24)

A number of police, fire and rescue vehicles were still visible at the scene late Monday night, along with heavy equipment.

Crews from Toronto Fire Services are also at the scene assisting emergency responders with the rescue operation.

Ontario's Ministry of Labour is on-scene as well and is investigating the incident.

The town of Port aux Basque in Newfoundland and Labrador is under a state of emergency as first responders cope with electrical fires, residential flooding, and washouts due to post-tropical storm Fiona.

New video from a ship off the coast of Newfoundland and Labrador shows the choppy conditions on the Atlantic Ocean as the-then Hurricane Fiona approaches.

One reason why Fiona has been labelled a 'historical storm' for Eastern Canada is because of its unusual left hook. Tracking for the storm released by the National Oceanic and Atmospheric Administration shows that, once it passes the 40th parallel north, its trajectory appears to veer slightly left, taking it straight to Nova Scotia and Prince Edward Island.

Russian forces launched new strikes on Ukrainian cities Saturday as Kremlin-orchestrated votes took place in occupied regions to create a pretext for their annexation by Moscow, while hundreds of people were arrested in Russia for trying to protest a mobilization order that commits more troops to the fight in Ukraine.