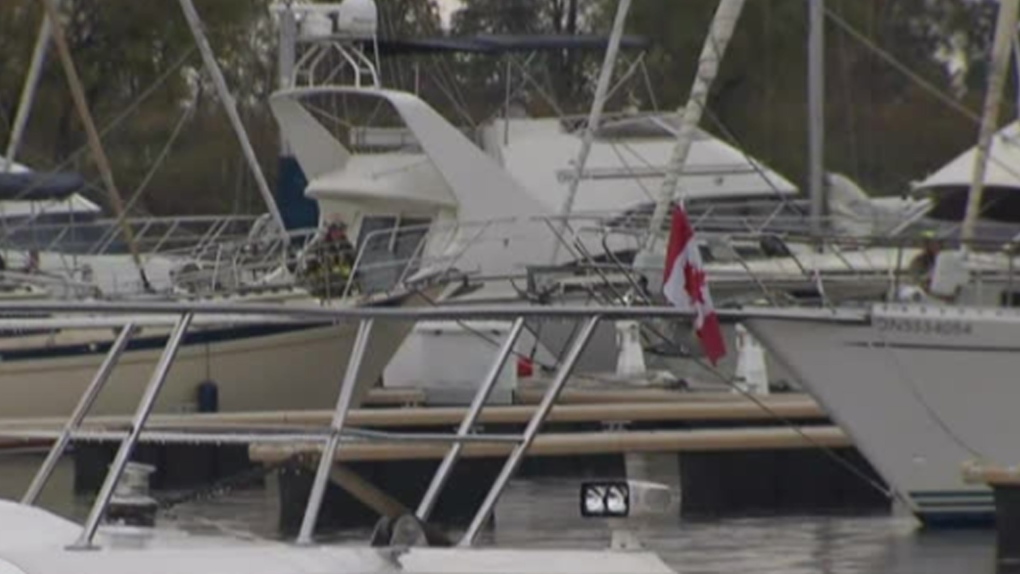 Two people were treated for burns and a boat went up in flames after several vessels caught fire at a marina in the Port Lands on Sunday.

Toronto Fire was called to the Outer Harbour Marina, near Leslie and Commissioners streets, shortly before 7:30 a.m.

Firefighters arrived to find two docked boats on fire in the harbour, with smoke and flames visible.

“When crews first arrived they could see heavy smoke and fair amounts of flame from quite a distance,” Platoon Chief Frank Carlisle told CP24. “The problem they had was accessing the dock area and water supply. They had to really pump to get enough water there.”

With the help of a fire boat, crews were eventually able to stamp out the fire.

“They were able to save two boats beside the fire that was involved,” Carlisle said.

Images from the scene showed the most badly burned boat smoldering in the harbour.

One man who escaped from one of the adjacent boats with his wife described the frightening moments.

“The flames were pretty hot. We had to huddle in behind the boat, our boat in order to stay away from the flames and we couldn’t get off it so we had to bail,” said the man, who identified himself as Bill.

Covering himself with a blanket, he said his wife suffered third-degree burns escaping the flames.

“What do you say? I’m glad everyone’s ok. Boats can be replaced but people can’t. Keep fire extinguishers handy, that’s for sure,” he said.

It’s not yet clear how the fire started.