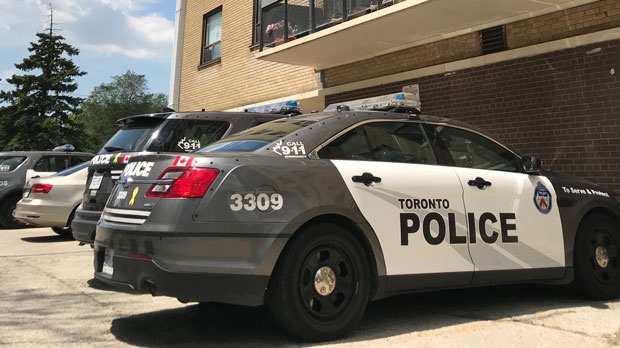 Emergency crews attend the scene of a stabbing at 57 Parkwoods Village Drive on June 27, 2019.

Detectives say they have charged two Toronto men with first-degree murder in the stabbing death of a 61-year-old man at an apartment in the city’s Parkwoods neighbourhood on Wednesday morning.

Officers were called to 57 Parkwoods Village Drive, near York Mills Road and Victoria Park Avenue, at around 7:37 a.m. for a reported stabbing.

When officers arrived on scene, Johnson Reyes was located with "obvious trauma" in a sixth floor apartment.

Police say he was reportedly unconscious and not breathing when crews arrived.

Paramedics later confirmed that the man was pronounced dead at the scene.

An autopsy found that Reyes died of multiple stab wounds.

Sometime before Friday evening, suspects identified as Stewart Rintoul, 52, and Everett Rintoul, 50, were arrested and charged.

Investigators say the suspects are brothers.

Police originally provided an incorrect name for one of the suspects.

Both men are expected to appear in court at Old City Hall on Saturday morning.