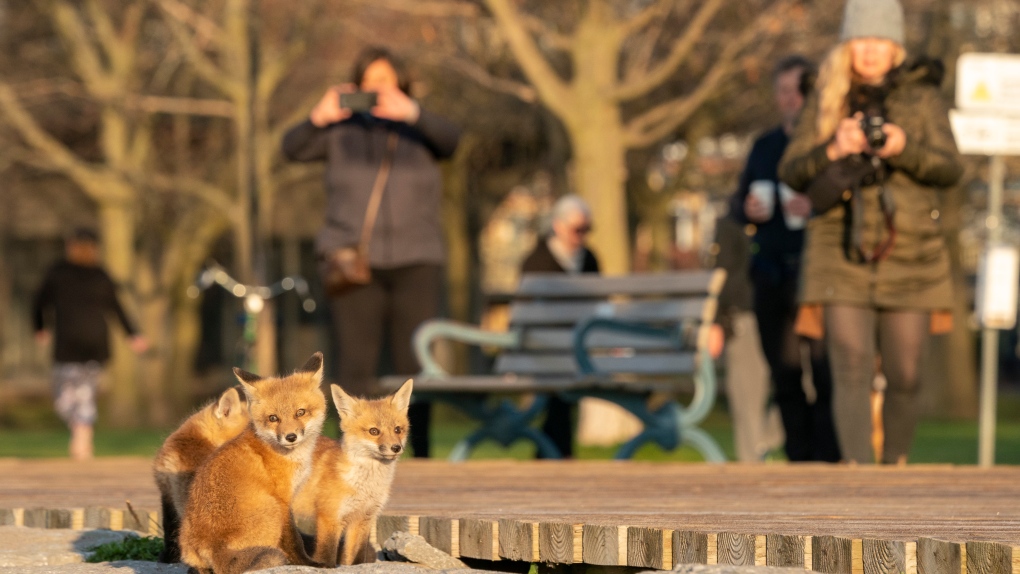 Fox pups sit in the early morning sun as walkers stop to take photos by the boardwalk on Lake Ontario in Toronto on Monday April 19, 2021.THE CANADIAN PRESS/Frank Gunn

TORONTO -- Two baby foxes living underneath the boardwalk at Woodbine Beach were found dead Saturday morning near their den.

The Toronto Wildlife Centre confirmed the news in a post on social media.

"It is with heavy hearts that we announce two fox kits were sadly found dead early this morning in an area close to the Beaches Boardwalk fox den," the centre wrote.

The fox family caught the city's attention in the spring of 2020 and drew large crowds to Woodbine Beach, many stopping by to feed them and take photos despite repeated warnings not to do so.

Last month, the family returned to the boardwalk, prompting the Toronto Wildlife Centre to ask residents to stay away from the animals to avoid what happened last year.

Another baby fox was killed around the same time last year, and the wounds suggested it was slain by an aggressive dog.

It is not known at this time how the two kits died.

"There's currently no evidence to suggest this past week's acts of vandalism were directly linked to the death of the kits," the centre said.

"We are currently looking into the matter and once we have more information on what happened, we will post an update."

In a statement, the city said post-mortems will be conducted to identify the cause of death.

“We continue to work closely with the Toronto Wildlife Centre on protection and mitigation efforts, including the recent installation of large barrier fencing with privacy screening. The City, alongside the Toronto Wildlife Centre, will develop a long-term strategy to deter the foxes from returning to the boardwalk location once the family has graduated from its den,” the statement read.

On Thursday, the centre reported that a camera set up to monitor the family was vandalized. The home of a volunteer keeping an eye on the foxes was also targeted.

"There are elements of both acts which strongly suggest it was the same person/people who carried out these offenses," the wildlife centre said.

Yesterday the camera we had to monitor the Beaches fox family was vandalized, as well as the home of a volunteer who lives in the area, which is upsetting to us. There are elements of both acts which strongly suggest it was the same person/people who carried out these offenses. pic.twitter.com/RerMx2RmU8

They have reported the incidents to police and are urging anyone who may have seen someone carrying a ladder towards the den or on a ladder leaning up against a nearby tree to contact police or Crime Stoppers.

The councillor for the area said he is saddened to learn about the deaths.

"The city has taken extensive measures to keep the den safe, working with Toronto Wildlife Centre and the community to ensure we have significant fencing and other barriers to protect the family," Coun. Brad Bradford said in a statement.

"It's important to remember these are wild animals and need to be treated and respected as such. In the fall, the city will be taking additional steps to close up this area so the foxes might find a home in a quieter, less prominent area."