Two arrested after more than $200,000 in drugs, cash seized by police in Oshawa 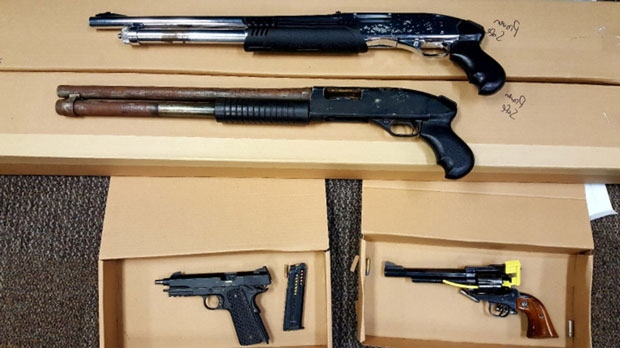 Two people are facing numerous gun and drug-related charges after police seized four firearms and more than $200,000 in drugs and cash during a traffic stop in Oshawa Friday night.

Durham Regional Police say that around 10 p.m., a vehicle was seen by officers speeding in the area of Ritson Road near Dean Avenue.

The vehicle was stopped and subsequently searched.

During the investigation, officers discovered 34 pounds of cannabis, an unspecified amount of cocaine, two loaded handguns and two loaded shotguns.

Both occupants of the vehicle were arrested.

Dylan Cadieux-Dacosta, 19, of Clarington, Ont., and Amber Cadieux, 43, of Oshawa have been charged with numerous gun and drug-related offences, including possessing a controlled substance for the purpose of trafficking, unauthorized possession of a firearm, and possession of proceeds of a crime over $5,000.

The suspects were both held for a bail hearing.

Police are asking anyone with information about the investigation to contact authorities at 1-888-579-1520 ext. 2700 or to reach out to Durham Regional Crime Stoppers anonymously.