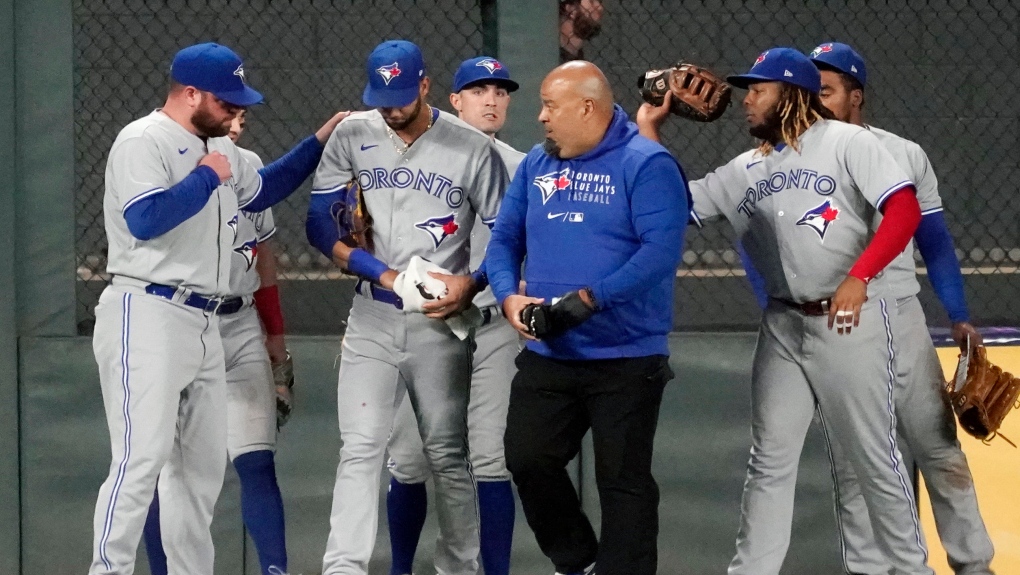 Toronto Blue Jays left fielder Lourdes Gurriel Jr., second from front left, heads to the dugout with a trainer and a towel-wrapped hand after he was injured fielding a double by Minnesota Twins' Mitch Garver in the fifth inning of a baseball game, Thursday, Sept. 23, 2021, in Minneapolis. (AP Photo/Jim Mone)

TORONTO -- Nick Gordon drove in four runs and Michael Pineda won his third straight start as the Minnesota Twins beat Toronto 7-2 on Thursday night to bump the Blue Jays back in the AL wild-card race.

The loss was especially costly for Toronto, which fell a full game behind New York for the second spot and three games behind wild-card leader Boston. Left fielder Lourdes Gurriel Jr. exited in the fifth inning after teammate Randal Grichuk accidentally stepped on his right hand in the outfield.

Blue Jays starter Steven Matz (13-8) lost for the first time in eight turns, finishing just three innings with seven hits and two walks allowed. He needed 80 pitches to get that far, and Toronto - with manager Charlie Montoyo serving a one-game suspension - turned the game over to the bullpen trailing 2-1.

Teoscar Hernandez tied it in the fourth with his 30th homer off a first-pitch slider from Pineda, but the game unraveled for the Blue Jays in the fifth. Gordon greeted reliever Julian Merryweather with a three-run homer, but there was significant damage done just before that.

On a double by Mitch Garver - who was 3 for 4 with an RBI - to the gap, Grichuk grabbed the ball to make a quick throw to the infield to keep Josh Donaldson from scoring. As Gurriel crouched down to give him space, Grichuk's cleat landed on Gurriel's hand during the follow-through.

Blood was dripping from his middle finger as Grichuk knelt next to him, before a team athletic trainer arrived for assessment and heavily wrapped the hand in a towel before Gurriel walked off. The Blue Jays said X-rays revealed no breaks, but he needed two stitches.

Thomas Hatch, who replaced Matz for the fourth, exited with right hamstring discomfort in the fifth trailing 3-2 right before Gordon broke the game open with his fourth homer of the season.

The Blue Jays left 11 runners on base, one in each of the first eight innings. Corey Dickerson, who replaced Gurriel, was thrown out at home by left fielder Luis Arraez to end the sixth. George Springer lined out sharply to the pitcher with the bases loaded to end the eighth after Ralph Garza entered in relief for the Twins.

Pineda gave up eight hits, two runs and one walk in five innings. The right-hander, who can become a free agent this fall, also picked up the victory with three scoreless innings on Sept. 6 at Cleveland in his first career major league relief appearance.

Blue Jays: Springer was the DH again, going 0 for 5 while still working his way back to full strength following a left knee sprain that kept him out from Aug. 15-29. He has not played CF since before the injury, which sent him to the injured list for a third time this season.

Twins: RF Max Kepler left the game in the fourth inning due to an illness unrelated to COVID-19.

Blue Jays: RHP Jose Berrios (12-8, 3.45 ERA) will start on Friday night, facing his former team for the second time in less than a week. He beat the Twins with three runs allowed over 6 2/3 innings in Toronto on Sunday, but this will be his first time on the mound at Target Field as a visitor.

“It's emotional, but it's my work, so I have to go out and do my work,” said Berrios, who is 4-1 with a 2.38 ERA in his last five turns. He was honored before the game with a tribute video on the scoreboard and a hearty ovation from the crowd.