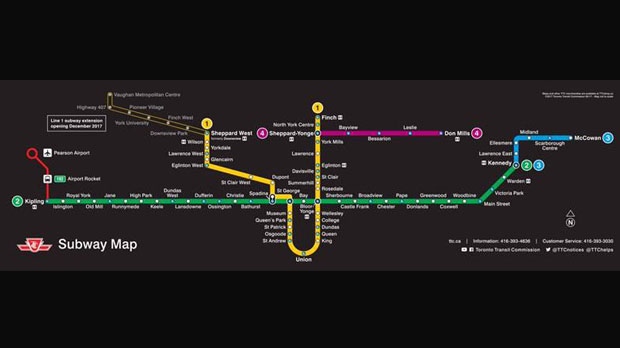 New TTC subway maps, which will appear at stations and in cars on May 7, show riders a mock-up of the Toronto-York Spadina Subway Extension, which is scheduled to open later this year. (Toronto Transit Commission)

People living north of the city will soon be getting a glimpse into the future Toronto subway line that extends to Vaughan.

Toronto Transit Commission announced it will start replacing its subway maps on May 7, in advance of the opening of the Toronto-York Spadina Subway Extension.

This extension adds six-stops on Line 1, starting at the north end of Downsview Park, just east of Sheppard Avenue and Keele Street and going north to Vaughan Metropolitan Centre.

The new maps show TTC riders a mock-up of the extended route, known as the Toronto-York Spadina Subway Extension. The extended route is scheduled to be ready for operation by December, 2017.

But this isn’t the only thing that will be different on TTC subway cars -- the new makeover includes the first formal name change in TTC history, TTC spokesperson Stuart Green told CP24 on Monday.

Downsview station, which until now has been the first and last subway stop on the west side of Yonge-University Line 1, will be renamed to Sheppard West station next month, even though the move doesn’t coincide with the opening of the Toronto-York Spadina extension.

“This change is to get people familiar with the new name before the opening,” said Green.

The name change is costing the TTC $800,000, but Green says the bulk of the price tag is to update the announcement system on board subway trains.

“We’re doing this change all at once,” Green said. “We’re making all the software changes to the announcements at once, so all six new stations are in the system and only need to be activated later.”

This makeover is part of the larger $3.2 billion Line 1 expansion project, which is the first TTC subway plan to cross a municipal boundary, with two stops in York region.

Ridership on the 8.6-kilometre extension is expected to reach more than 26 million a year.

The last subway project the TTC completed was Sheppard Line 4, which opened 15 years ago.

The branding update won’t be complete until the end of the year.

Green told CP24 the maps will change again in December when the subway extension officially opens.

The material cost of making, printing and installing the updated signs and maps inside stations and aboard TTC cars is $200,000 the first time around, Green said.

But a “number of them will have to be redone,” he added, to reflect one continuous line to Vaughan Metropolitan Centre.

While he doesn’t know what the exact cost associated with redoing the signage seven months later will be, Green anticipates it will stay under $200,000.