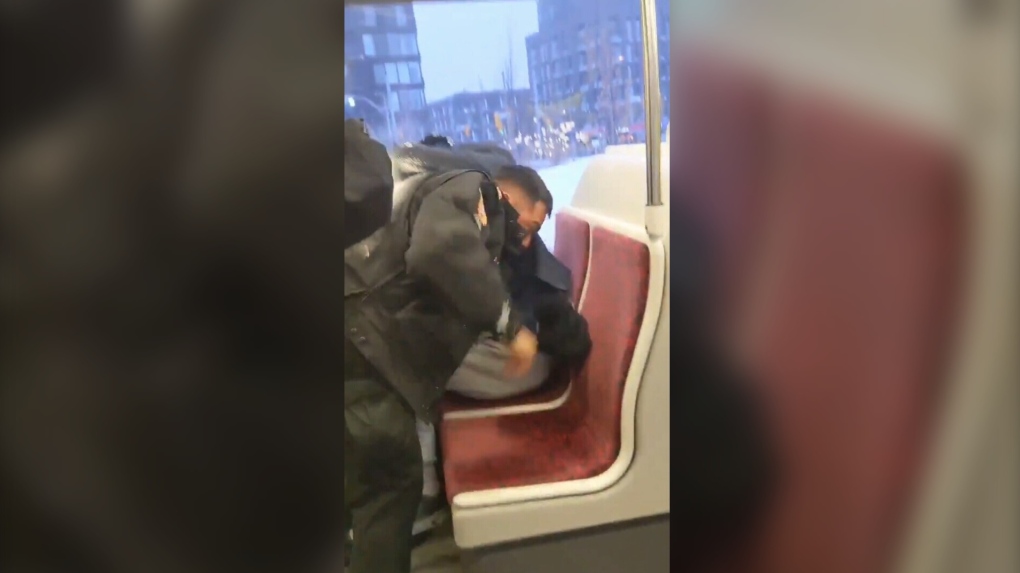 A TTC Special Constable is seen involved in a violent altercation on the 501 streetcar. (Twitter/@CascadingDesign)

TORONTO -- Two TTC special constables who were involved in an altercation with a streetcar passenger nearly a year ago have been fired, their union said Friday.

CUPE 5089, which represents more than 180 TTC special constables, fare inspectors, and protective service guards, confirmed the news in a statement posted to Twitter. The union said it is disappointed in the transit agency's decision.

The officers' termination comes more than a month after an investigation into the Feb. 7 incident on a 501 streetcar found that the officer's use of force against a passenger was "unnecessary" and "discriminatory."

A short video captured part of the incident and was posted online. In the video, two TTC special constables are seen subduing a man. One of them pins him to a streetcar seat, while the other deploys a pepper spray on him.

The TTC retained an independent workplace investigation firm to probe the incident after the video garnered the attention of the public and city officials who called it "very disconcerting" and "unacceptable."

According to the report released on Dec. 12, two special constables and a fare inspector used unnecessary force during the altercation. The investigator also found that the use of force by the special constables "was impacted by their perception" of the passenger's mental health, which was discriminatory.

The report made several recommendations, including improving training regarding mental health and more clarity regarding fare inspectors' use of force. The firing of those involved was not in the report's list of recommendations.

Toronto's ombudsman called on the TTC to overhaul how it oversees its special constables and fare enforcement officers following the release of the report.

The union disputed the report and said it was "politically motivated and failed to take into consideration any of the relevant legal, procedural, or factual evidence."

CUPE 5089 maintains that the actions of the constables were reasonable. The union noted that the officers were cleared of any wrongdoing by the Toronto Police Professional Standards a month after the incident.

"As we have done from the beginning, we will continue to fully support the actions of our members," the union said.

"The only positive that has come from this unfortunate incident is that the level of violence occurring almost daily towards customers and staff on Toronto Transit Commission has finally been brought to the public's attention."

CUPE 5089 said they have filed a grievance with the TTC and expect the constables to be reinstated.

In a statement, TTC spokesperson Stuart Green confirmed the news but said the agency will not comment further as the union has indicated the matter is still active.

Please see our attached statement regarding the conclusion of the 501 Streetcar Investigation from Feb 7, 2020. We are extremely disappointed in the TTC decision in this matter. The investigation was flawed from the beginning. The truth will prevail. pic.twitter.com/vn2ADTvBcO