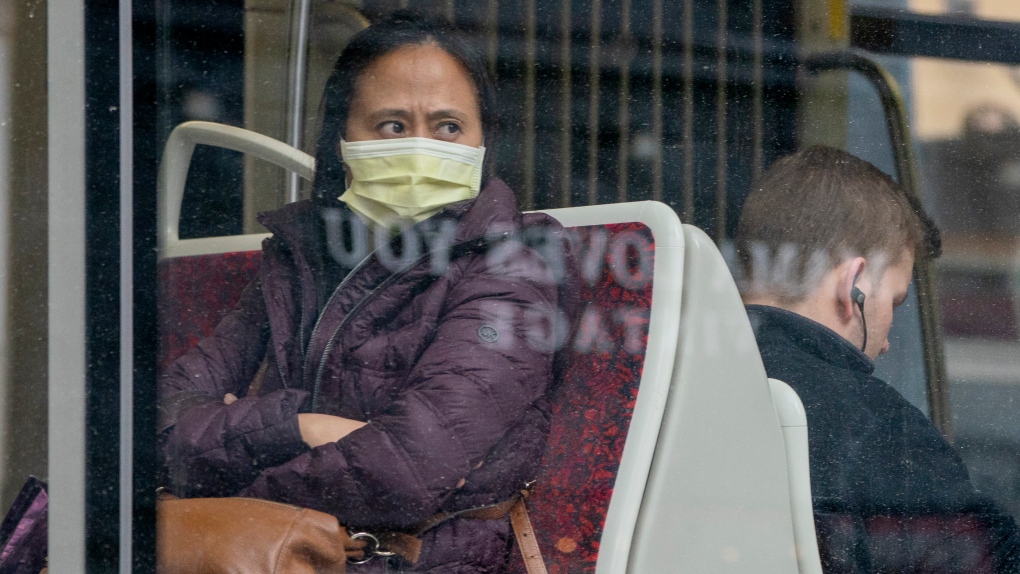 A woman wears a mask as she rides a TTC streetcar in Toronto on Friday, March 20, 2020. THE CANADIAN PRESS/Frank Gunn

TORONTO -- As new emergency orders to slow the spread of COVID-19 come into effect across Ontario, TTC riders and operators are expressing concern that more measures may be needed to keep transit safe.

Speaking with CP24 Thursday, Shelagh Pizey-Allen of the group TTCRiders said that transit users in the city are concerned about crowding, inadequate mask use among riders and the resumption of TTC fare inspections.

She said in the early days of the pandemic, the TTC made transit safer by distributing masks, implementing rear-door boarding and pausing fare inspections. She said she'd like to see some of those measures re-introduced.

“The biggest concern we're hearing about is that not everybody is wearing a mask and so people do get too crowded, and that's a concern,” Pizey-Allen said.

Transit operators have also been expressing concern that many people are not wearing masks as prescribed while using the TTC.

“Our customers are getting on vehicles and many of them are not wearing masks or when they are wearing masks they're putting it below their nose, and reading a book or something,” Carlos Santos of ATU local 113, which represents TTC operators, told CP24. “What we want is to make sure that customers that are wearing masks, keep that mask on. We're also getting lots of photos of overcrowded vehicles.”

Santos said the union also wants to see rear-door boarding, proper blocking of the seats closest to operators, another pause on cash fares and transfers and better education and enforcement around mask use.

“We've been asking for the same safety precautions that we had back in March last year, and it's just absurd that the TTC and (CEO) Rick Leary would not re-implement the same safety precautions that we had a year ago or 10 months ago, when we had 300 cases a day in Ontario and now we're at, you know we're averaging 3,000, which is 10 times the amount.”

Speaking with CP24, TTC Spokesperson Stuart Green said the commission has been working to keep the system safe and there is no indication that current practices are contributing to the spread of the virus.

“We also work with Toronto Public Health and if they were giving us any indication that our practices are contributing to spread, we would absolutely change them,” Green said. “But we’ve been very fortunate. There's no link to the TTC, riding the TTC and transmission of the COVID virus. That's very good news. We're not taking that for granted but we continue to work to keep the system safe for our employees and our customers.”

He said all-door boarding of vehicles helps to increase airflow and to reduce customer bunching. The TTC also continues to distribute masks to customers, he said.

In terms of crowding, Green said the latest TTC figures indicate that around 96 per cent of all bus trips have fewer than 25 people on them.

He said when buses do get crowded, the TTC faces a choice between letting on a few more people or leaving people at their stops, somethings they don't want to do.

“So we've only got about four per cent of our bus trips that have more than that number. Our aim obviously is to keep that number as low as humanly possible,” Green said. “We've put extra buses out, our budget this year increases the amount of bus service over last year. As well, we're retraining operators right now so we'll have even more bus service out there in the coming weeks and months.”