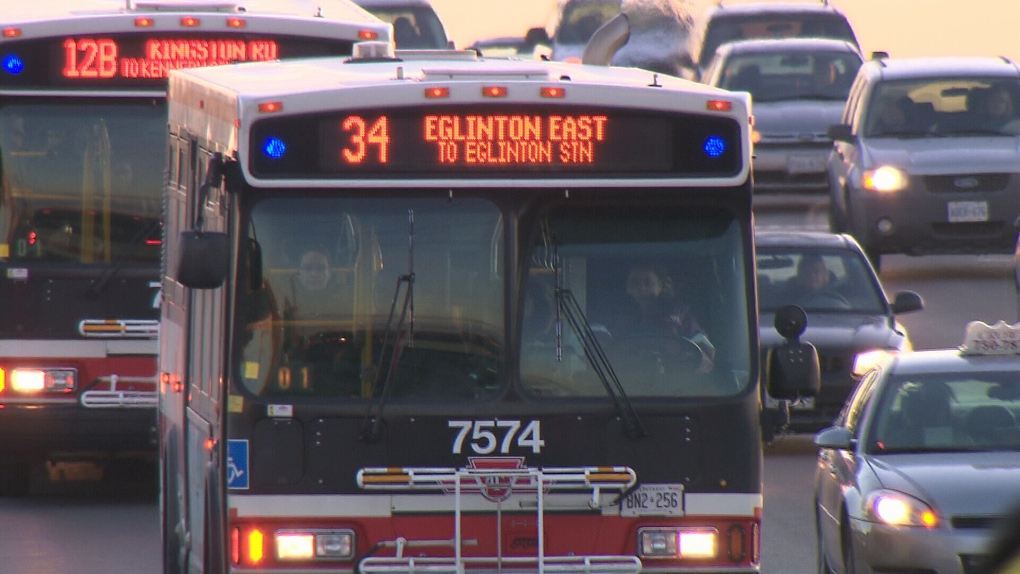 TORONTO -- TTC bus drivers are now being instructed by their union to limit the number of passengers on their vehicles to no more than 15 following reports of overcrowding on more than a dozen routes.

The Amalgamated Transit Union Local 113, which represents roughly 12,000 TTC workers, sent out a memo on Thursday advising bus operators to limit the number of passengers they carry to 10 on regular buses and 15 on articulated buses.

The memo comes after the TTC added 85 additional buses to 15 busy routes on Wednesday morning in an effort to reduce crowding during the COVID-19 pandemic.

“ATU Local 113’s recommendation comes after ongoing overcrowding on some TTC bus routes, which goes against the guidelines coming from public health officials and political leaders,” ATU Local 113 President Carlos Santos said in the release. “We apologize for any inconvenience to the public. However, limiting the number of passengers on TTC buses will help ensure riders are practicing physical distancing by staying two metres away from each other.”

The TTC has seen its ridership decline by roughly 80 per cent during the pandemic but crowding has continued to persist on some of its bus routes.

Speaking to CP24 on Thursday afternoon, Santos said it is not a mandate, but the numbers would serve as a guidance to operators on how to implement safety measures.

"We're not telling them, okay, if you have 11 now, one person has to go. We're asking them to play a role in actually in keeping our passengers as well as, as our operators safe," he said.

Santos said the recommendations come after several drivers sent him photos of packed buses, adding that a lot of them are scared for their health and the safety of their families.

He said it is not a labour relations issue but a health and safety issue.

For the transit agency, TTC spokesperson Stuart Green said they don’t disagree with the union, saying that 10 to 15 is a good number for people on a bus.

However, Green said having to do things like head counts would take drivers’ attention away from operating the vehicle safely.

To address the issue of overcrowding, he said they are deploying extra service.

“So rather than implementing unenforceable head counts, we're putting extra buses out in those areas where we know there are high, there's higher traffic and certain times of day people going to shift work for example, and employment areas,” Green said.

He said they have identified hotspots in the city that needs extra buses to avoid overcrowding.

Green had previously told CP24 that the morning peak has moved up from 8 a.m. to prior to 7 a.m., likely due to shift workers in essential services making up a greater portion of the TTC’s ridership.

Green has said that the TTC is doing everything it can to reduce crowding, but he has also called on riders to do their part by altering their travel times and commuting after 8 a.m. when possible.

The TTC has previously said that it has assigned 14 supervisors to “key positions throughout the system” in order to direct additional buses to “where they are needed most.”

They have also said that vehicles will bypass stops if too full.

They have, however, not taken additional steps to reduce the capacity on their vehicles. Brampton Transit, for example, has cut the number of people allowed on its buses at any one time in half.

According to Santos, six TTC employees – a mechanic, a Wheel-Trans operator, a subway operator, a bus driver, a fare collector, and a TTC supervisor (non-unionized) ­­– had been tested positive for COVID-19.