TSX closes up as Italy worries push up gold's price 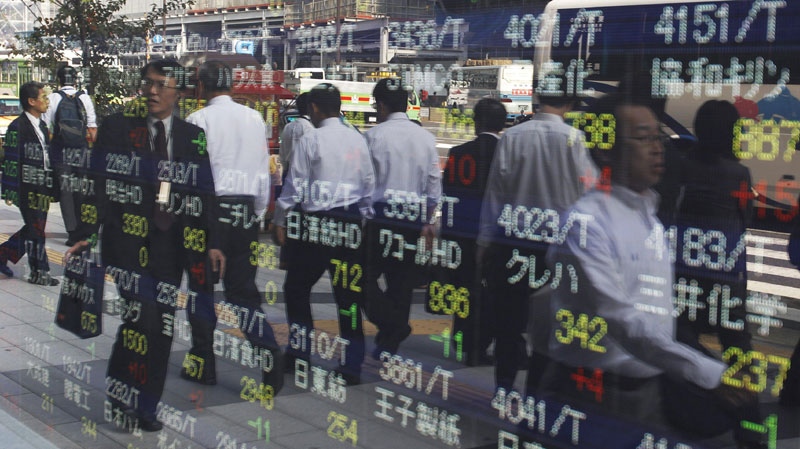 Pedestrians are reflected on the electronic stock board of a securities firm in Tokyo, Japan, Friday, Nov. 4, 2011.

TORONTO - The Toronto stock market closed higher, led by the influential gold index on the back of soaring bullion prices that ended the session at a six-week closing high.

EU Monetary Affairs Commissioner Olli Rehn said that Greece can receive the next C8-billion slice of its first bailout in November, if both parties commit to the bailout program. But investors were already turning their attention to Italy's debt.

Italy's borrowing rates spiked Monday to their highest levels since the country adopted the euro and there was speculation that Italian Prime Minister Silvio Berlusconi may be forced to resign, although Berlusconi has so far rejected the idea. Markets fear that Italy's debts are too large to be handled by an international bailout.

"The big story in Europe today has been the Italian market. While Greece managed to cobble together a coalition to pass the recent bailout agreement and then hold elections, the situation in Italy remains fluid," said Colin Cieszynski, a market analyst at CMC Markets Canada.

"Italy is a far bigger fish than Greece, which may force EU policy-makers to take much more prompt and decisive action."

Following last week's turmoil centred on worries that Greece was heading for imminent bankruptcy, investor fears are now focused on Italy, the eurozone's third-largest economy. Italy is also the third-biggest debt market in the world.

If its cost of borrowing rises too much, the country wouldn't be able to raise the money it needs to roll over its debts, creating big problems for the European banking system and the global economy.

Greece's two main political parties reached a deal over the weekend to share power in a new government, increasing the likelihood that the country will move ahead with austerity measures it promised to implement as part of a financial rescue agreement with its lenders. That relieved investors by reducing the chances of an imminent default by Greece, which would rattle financial markets and cause losses for major European banks.

But in Italy, Berlusconi's government faces a confidence vote this week.

The finance ministers of the 17 countries that use the euro were meeting again later Monday, but it was not clear they would have any more success than the G20 summit of world leaders in Cannes, France, last week.

In Canadian corporate news, uranium miner Cameco (TSX:CCO) shares dropped 6.5 per cent or $1.42 to $20.35 after it said its third-quarter profits dropped 60 per cent to $39 million from $98 million a year earlier. On a per share basis earnings were 10 cents compared to 25 cents.

RioCan Real Estate Investment Trust (TSX:REI.UN) tripled its third-quarter net earnings to $168 million, or 63 cents per unit, up from $56 million or 23 cents per unit a year ago, on various acquisitions. Shares were up 23 cents to $25.15 on the TSX.

Ensign Energy (TSX:ESI) said its net profit in its latest quarter was $64 million or 52 cents per share in the three months ended Sept. 30. That was double the $32 million, or 21 cents per share, the company made in the same quarter a year ago. Its shares added 20 cents to $15.55 each.

The union representing Air Canada's (TSX:AC.B) flight attendants says an arbitrator has issued a decision that establishes a new collective agreement with the Montreal-based carrier. The union said it was "profoundly disappointed" with the decision that imposes provisions of a tentative agreement that were rejected by employees last month. Shares in Air Canada were up two cents to $1.38.

Shares in TransCanada Corp. (TSX:TRP) lost 72 cents to $41.65 after the U.S. State Department said its inspector general will review the department's handling of an environmental assessment of its proposed Keystone XL pipeline. That will likely delay a final decision on what's become a political hot potato for the Obama administration.