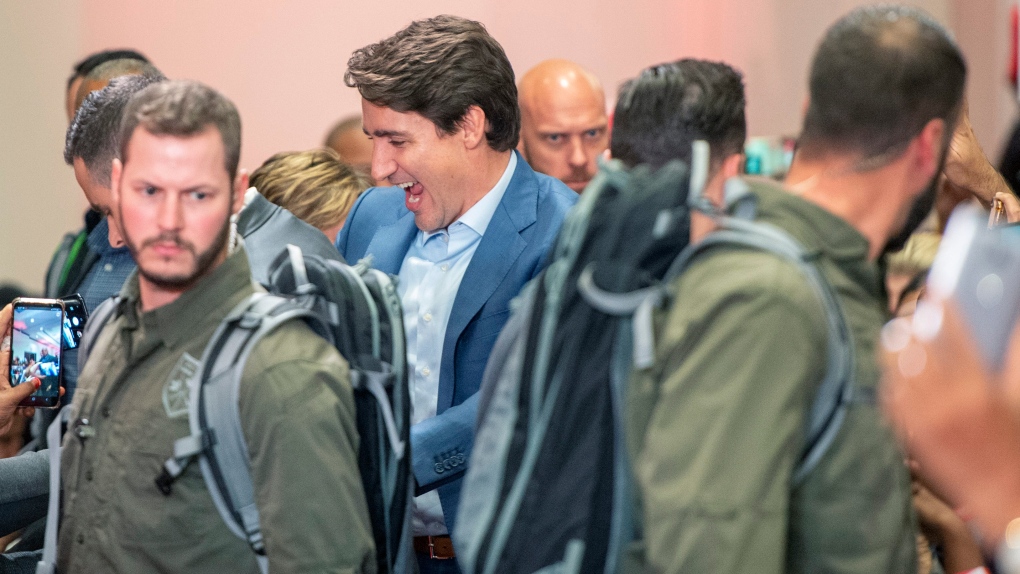 High profile security surrounds Liberal Leader Justin Trudeau as he arrives at a rally in Mississauga, Ont., Saturday, Oct. 12, 2019. The Rally was delayed for 90 minutes due to a security issue. THE CANADIAN PRESS/Frank Gunn

MISSISSAUGA, Ont. - Liberal Leader Justin Trudeau wore a protective vest and was surrounded by heavy security during a large rally in the Toronto suburb of Mississauga on Saturday due to an unspecific security threat.

More than 2,000 Liberal supporters turned out for the crowded rally, which was delayed by 90 minutes before Trudeau took the stage wearing a suit jacket rather than his usual rolled-up sleeves and escorted by both his plainclothes RCMP detail and Mounties in tactical gear.

Photos later confirmed Trudeau was wearing a bulky protective vest under his jacket while the RCMP officers remained on stage during the address and near his side as he shook hands afterward.

Prepared remarks also indicated his wife, Sophie Gregoire Trudeau, was to introduce the Liberal leader. However, she did not appear despite having flown with Trudeau from Vancouver earlier in the day.

The Liberal campaign would not officially comment on the delay or reasons for the increased security presence, but one source confirmed to The Canadian Press there was a security threat.

The Peel Regional Police referred questions to the RCMP, which did not immediately respond to requests for comment.

Trudeau is scheduled to campaign in the Toronto area on Sunday as the federal election campaign heads into its final week with the Liberals and Conservatives running neck and neck with the New Democrats and Bloc Quebecois also picking up some steam.

During his 25-minute speech, Trudeau took aim at Scheer, trying to link proposed spending cuts in the federal Conservative platform to cuts made in Ontario by Premier Doug Ford. Liberals supporters booed both loudly when Trudeau mentioned them by name.

Trudeau also urged progressives to vote for his party as he accused the NDP of having failed to hold Conservative governments to account when they were in the official Opposition, specifically now in Ontario and when former prime minister Stephen Harper had a majority.

This report by The Canadian Press was first published on Oct. 12, 2019.