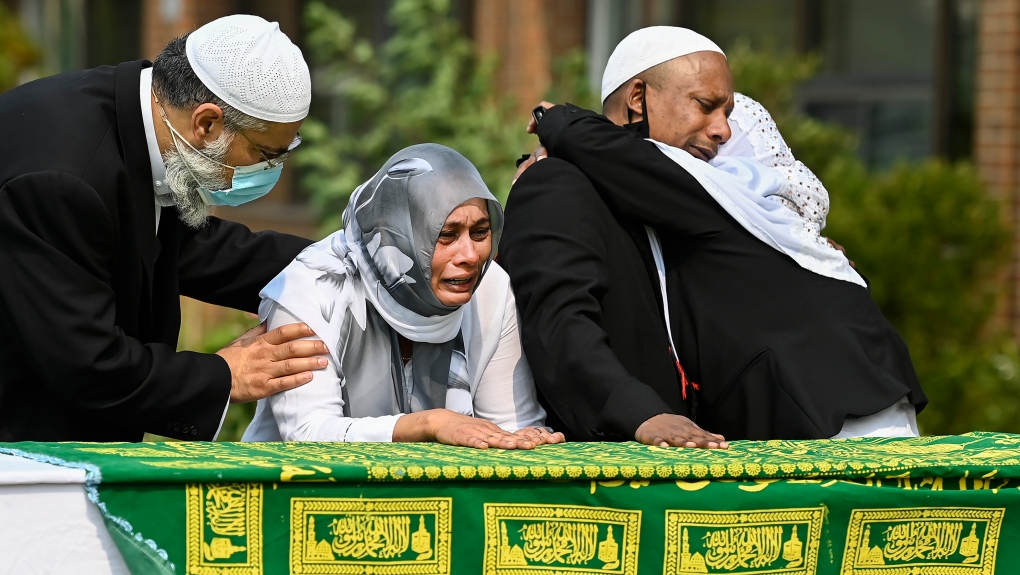 Daughter Bebe Zafis, second left, and family members react at her fathers casket during the funeral of Mohamed-Aslim Zafis in Toronto on Wednesday, September 16, 2020. Police say Zafis was fatally stabbed by an unknown suspect while he sat outside the mosque as he controlled entry to the building in order to comply with public health protocols. THE CANADIAN PRESS/Nathan Denette

Earlier this month, Mohamed-Aslim Zafis was approach by a man while he was sitting outside the International Muslim Organization mosque in Toronto and stabbed.

Zafis, a man known for his charity and goodwill, was pronounced dead at the scene.

Guilherme "William" Von Neutegem, 34, is now charged with first-degree murder in connection with the incident. The charge has not been proven in court.

“My heart goes out to the loved ones of Mohamed-Aslim Zafis. The reports that his murder was motivated by Neo-Nazism and Islamophobia are extremely concerning,” Trudeau posted on Twitter Tuesday.

“We stand with Muslim communities against such hatred, which has no place in Canada. We are with you.”

My heart goes out to the loved ones of Mohamed-Aslim Zafis. The reports that his murder was motivated by Neo-Nazism and Islamophobia are extremely concerning. We stand with Muslim communities against such hatred, which has no place in Canada. We are with you.

While police have not publically confirmed the crime was hate-motivated, Von Neutegem has allegedly shared content from a satanic neo-Nazi group on social media, according to an organization that tracks online extremism.

The Canadian Anti-Hate Network, a non-profit organization that researches, monitors and combats hate groups, has reported that the suspect’s social media is allegedly connected to a variety of known racist and Nazi-inspired occult movements.

The Toronto Police Service told CTV News Toronto on Tuesday evening that the investigation is ongoing and police are still working to confirm any possible motive.

"If we discover evidence that may suggest the murder was motivated by hate, that information would be shared with our hate crime investigators and crown attorneys," a police spokesperson said.

Police have previously said there does not appear to be any relationship between the accused and the victim. But on Saturday, investigators said they were aware of allegations that the murder suspect had ties to a neo-Nazi social media group.

“As far as the investigation goes, looking into the social media of the accused is an important part of trying to determine motive,” Supt. Ron Taverner said on Saturday. “That process is ongoing and hopefully we can have answers to that question in the coming days.” 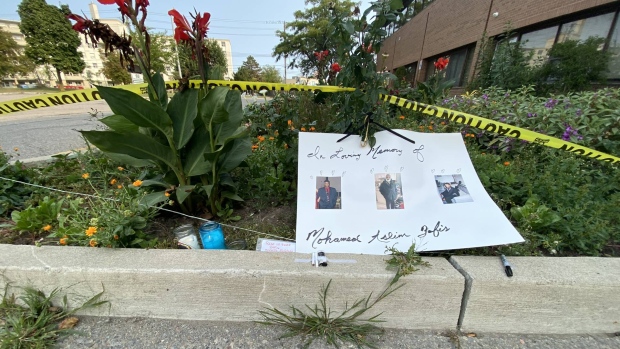 Several politicians and advocacy groups across the region spoke against the act of violence and urged police to thoroughly investigate the matter.

“The news that his murder was motivated by Neo-Nazism and Islamophobia are very alarming,” Brampton Mayor Patrick Brown stated Tuesday. “Brampton stands with the Muslim community against hate. There must be zero tolerance for hate crimes.”

“Everyone should feel and be safe in their communities and places of worship,” she wrote on Twitter Tuesday. “The attack on Mohamed-Aslim Zafis is part of a trend of white supremacist hate and terror we must confront. News that the perpetrator of this Islamophobic attack has Neo-Nazi ties make this even clearer.”

We must all stand together & call out hate wherever we see it. But that alone won’t fix this systemic problem.

Governments must step up & fight hate by prioritizing & funding critical anti-racism work. And social media companies must be accountable for hate on their platforms.

Advocacy groups like the National Council of Canadian Muslims (NCCM) are calling on the federal government to take action in dismantling Islamophobic, Neo-Nazi and white supremacist groups.