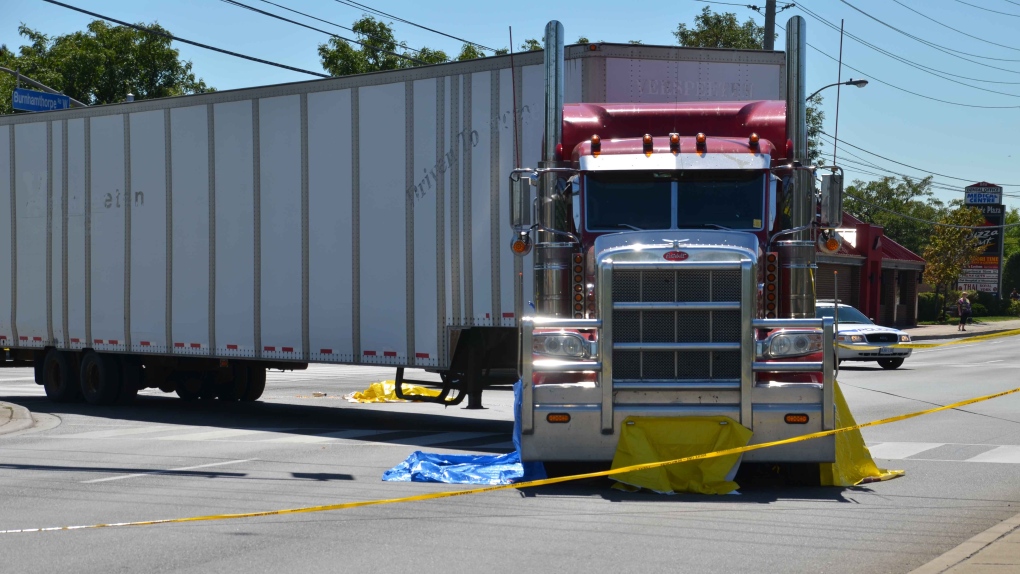 Police investigate after a tractor-trailer struck and killed an 81-year-old woman on Burnhamthorpe Road West near Wolfedale Road in Mississauga on Wednesday, Aug. 29, 2012. (Andrew Collins)

An elderly pedestrian died Wednesday after she was hit by a tractor-trailer in Mississauga.

Police said an 81-year-old woman was near a pedestrian crossing in a busy intersection on Burnhamthorpe Road West, near Wolfedale Road, when she was hit by the tractor-trailer as it was turning right.

Police said the woman was using a walker to cross the road and she was carrying a drink bottle and what appeared to be items from a pharmacy.

The driver of the tractor-trailer, a 47-year-old man from Quebec, remained at the scene and was co-operative, police said.

The driver was not injured.

He was later charged with carless driving under the Highway Traffic Act.

He will not face criminal charges, police said.

“Careless driving is still a very serious charge,” Peel Police Const. Erin Cooper told CP24. “If convicted, it has six demerit points that are possible and there are other implications, especially if you drive for a living.”

Police are asking any witnesses who saw the collision to come forward.