TORONTO -- The driver of a truck involved in a bizarre collision on Highway 401 that was caught on camera told police he wasn't aware he struck another vehicle.

On Tuesday, the Ontario Provincial Police asked the public for information about the crash after video emerged online showing a yellow truck pushing a Honda Civic sideways across lanes of traffic.

The Honda Civic is then seen brushing the guardrail before it stops and the truck is seen continuing along the roadway. 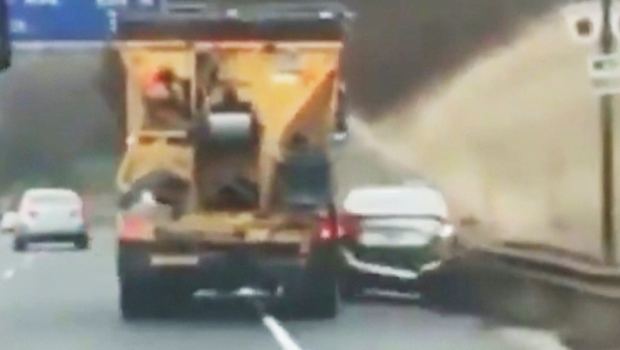 Police said the incident occurred on Highway 401 between Bayview Avenue and Yonge Street on Monday. Since releasing the video, police said they have identified the drivers involved in the collision.

"The truck driver still has some explaining to do," OPP Sgt. Kerry Schmidt told CP24 on Wednesday.

"He claims he was changing lanes and did not see the car. I don't know if that was possible or not but he certainly made quite the contact with that car."

Schmidt said the 40-year-old male driver of the Honda Civic, who is from Scarborough, suffered minor injuries.

Drivers identified in dash cam video of a crash where a truck was pushing a car to the shoulder on #Hwy401 https://t.co/J79L0s6iat

Speaking with CTV News Toronto on Wednesday, the driver said he thinks he is lucky to be alive.

“He never slowed down,” the driver, who only wanted to be identified as Chris, said. “He kept on moving at the same speed I was screaming and honking and that didn’t help at all. At one point I saw behind me that he was going on an angle towards a barrier wall…that was really scary.”

Chris said he was driving westbound on Highway 401 between two trucks when one of them started to move towards him. His car spun about 90 degrees and he was pushed towards a barrier.

“Because it was at an angle, my trunk hit the barrier first, which made my car to swing around.”

“I was pretty lucky.”

While Chris did not sustain any serious physical injuries, he did say that he is taking some time off work to rest. He told CTV News Toronto that he hurt his back and was given medication for some head pain.

Investigators are now looking for video footage from before the crash to try and piece together what happened.