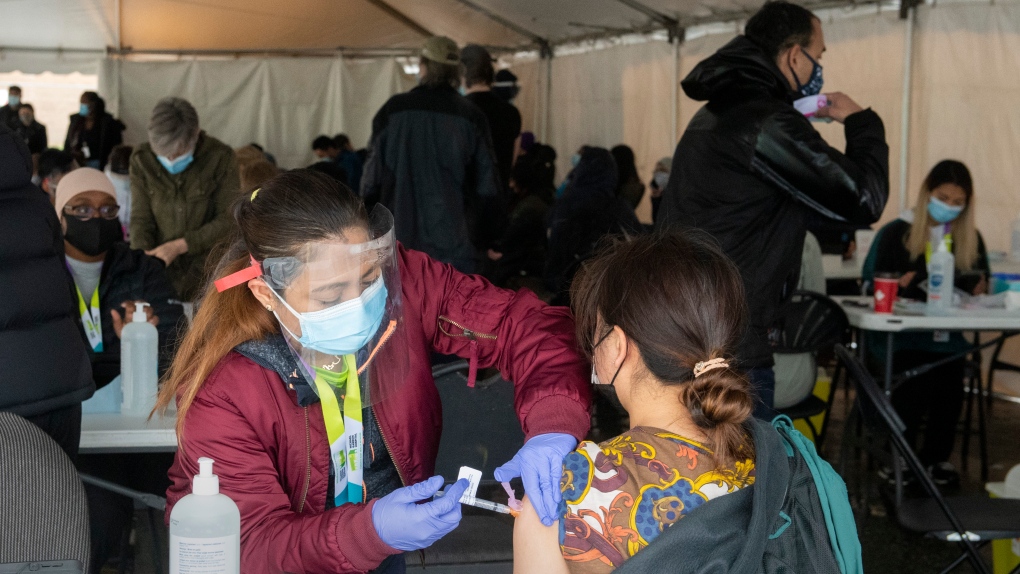 A nurse administers a COVID-19 vaccine at a pop-up clinic at the Masjid Darus Salaam in the Thorncliffe Park neighbourhood in Toronto on Sunday, April 11, 2021. Thousands of people have lined for vaccine doses at the mosque in the hard hit neighbourhood. THE CANADIAN PRESS/Frank Gunn

TORONTO -- Mayor John Tory says pop-up COVID-19 vaccination clinics are continuing to operate in Toronto this week as the city works with the province to open up the provincial appointment booking system to residents over the age of 18 in the city’s hot spot neighbourhoods.

On Saturday and Sunday, long lineups formed outside a Thorncliffe Park pop-up clinic where residents aged 18 and older in select hot spot postal codes were eligible for a shot.

About 2,400 doses were administered at the clinic over the weekend.

“There are clinics like that going on every day and so today there are at least seven happening in hot spot neighbourhoods and those are open to people who are 18 plus,” Tory said.

He noted that city staff is currently working with the province to open up the vaccine booking portal to younger age groups in hot spot postal codes in Toronto.

“Just as an example of how it helped us. When we opened the registration to 50 plus people in hot spot neighbourhoods Friday, about 75,000 people over the weekend booked appointments at the city-run clinics. So that's why they are pretty much booked up this week.”

Three more city-run mass immunization opened up in Toronto today, including sites at Cloverdale Mall, the North Toronto Memorial Community Centre, and the Carmine Stefano Community Centre. There are now nine mass vaccination sites being operated by the City of Toronto.

All Toronto residents aged 60 and older are currently eligible to book an appointment at these centres, along with those 50 and older in hot spot neighbourhoods identified by the province.

Tory said the city has the capacity to inoculate more residents but is limited by the amount of supply that has been allocated.

“Obviously you can't operate a clinic without vaccine so what we do and what we have done from the beginning is we don't offer an appointment unless we have committed vaccine to accompany that appointment,” he said.

“So as we plan ahead, going out several weeks, we base the number of appointments we’re offering on the vaccine we know is going to be available to us.”

In York Region, some clinics, including the mass immunization site at Canada’s Wonderland, have been forced to temporarily close due to a lack of vaccine supply.

“Unfortunately the Ontario government was not able to provide York Region with any additional Pfizer or Moderna vaccine to support our public health-led clinics,” a statement from a York Region spokesperson read.

“As a result, we are forced to temporarily close clinics at Canada’s Wonderland and the Georgina Ice Palace, effective Tuesday, April 13, 2021. These clinics will remain closed until we receive additional vaccine.”