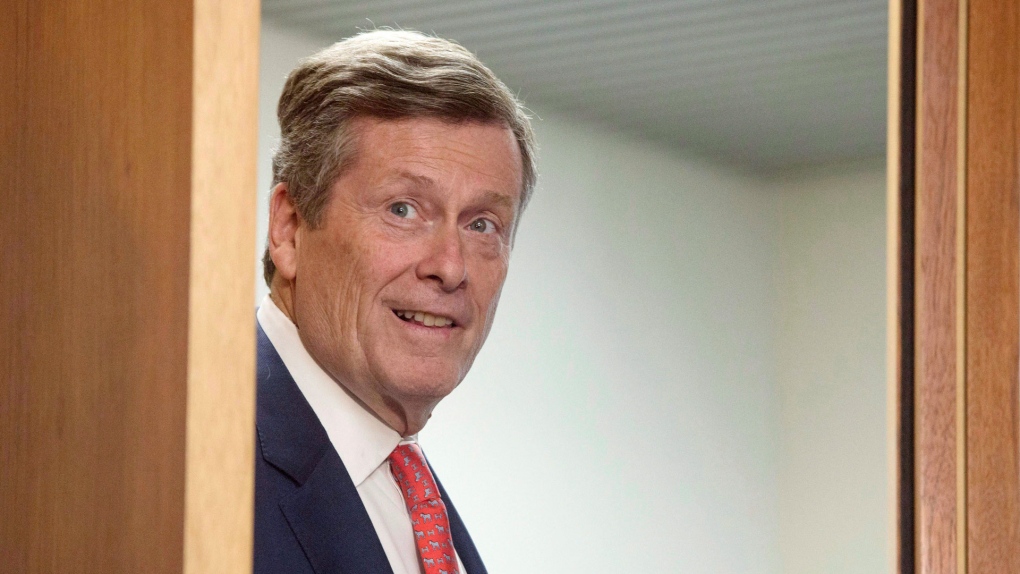 Mayor John Tory looks on after a press conference in Toronto on Friday, August 3, 2018. THE CANADIAN PRESS/Chris Young

TORONTO -- Mayor John Tory will step outside his condominium for the first time in two weeks today but is vowing to continue to mostly stay at home and practice social distancing, much as he is advising residents.

Tory spent 14 days in self-isolation after returning from a trade mission in the United Kingdom and had to guide the city’s response to the worsening COVID-19 outbreak mostly over the phone and through online teleconferencing.

His quarantine was officially lifted at 9 p.m. on Wednesday but on Thursday morning he told CP24 that he still hadn’t been outside and was planning to mostly remain at home, where possible.

During his time in quarantine, Tory had no physical contact with anyone else. The only time someone would even come near his door would be when they had to drop off something outside or pick up something he would leave hanging from his door knob.

“I haven’t even been into the hall of my condo for the 14 days so I will do that today. I am also going to go to the office today to participate in some of the briefings and what not but I am going to go for only part of the day because again I am going to try to follow my own advice and the advice of the medical officer of health and that is to work largely from home so I am not in contact with people and they are not in contact with me,” he said. “I think I must be pretty clean because I have been by myself for all this time but having said that you have to do what you tell others to do.”

Tory announced that he would self-isolate at home back on March 12, two days after he returned from the trade mission abroad.

At the time, public health officials had just begun to strongly recommend that anyone returning to the country spend 14 days in self-isolation at home to help limit the spread of COVID-19.

That recommendation, however, became mandatory on Wednesday when the federal government announced that it was taking the extraordinary step under the rarely used Quarantine Act. Going forward any found to violate the order can face penalties including a fine of up to $750,000 and six months in jail.

Speaking with CP24, Tory said that his time in isolation was enlightening in some ways, particularly when it comes to the degree of loneliness that some residents might be feeling right now.

“Thank goodness I had all the phone calls and contact with other people to keep me busy and occupied. Loneliness I think it something that must be affecting a lot of people who are not quarantined but just live by themselves and can’t go out, maybe because they are older,” he said. “We have been saying all along that we have to step up our efforts for elderly people who normally would go out to the doctor here or there or go shopping and now we are saying ‘please don’t’ so those people may be getting quite lonely.”

As Tory has remained in self-isolation, the city and other levels of government have increasingly acted to place restrictions on public life as a means of limit the spread of COVID-19.

The latest action came on Wednesday afternoon when the city announced that it would close all facilities within its parks effective immediately, including playgrounds.

“I just don’t know why people don’t seem to completely understand how incredibly crucial and important this (social distancing) is to stopping the spread of this thing,” Tory said on Thursday. “We have seen the devastation elsewhere. So we are having to help them by putting up the signs and wrapping up the basketball hoops. It is something that breaks my heart to have to do.”

Tory said that he remains optimistic that we won’t “get to the point where we have to discuss a much more widespread restriction on peoples movements or more heavy compliance,” as has been seen in some other countries.

He said that in order for that to be true, residents need to practice social distancing, with few exceptions.

That means staying away from crowds, whether it is on a sidewalk, at a park or even a busy grocery store.

“You see the examples of where people just weren’t staying away from those playgrounds and weren’t distancing themselves,” he said. “Unfortunately a small number of people have ruined it for the rest.”