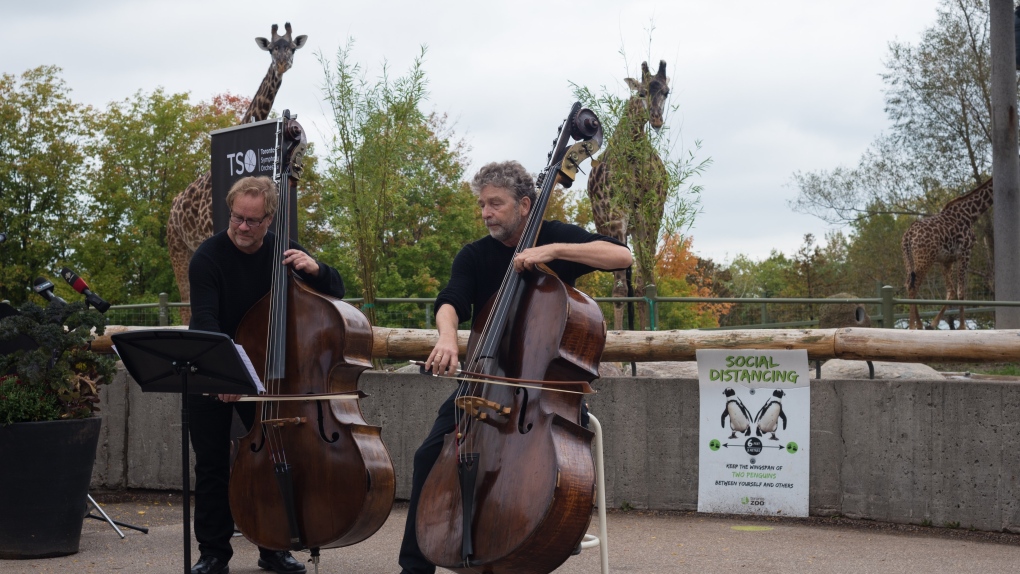 Paul Rogers, left, plays the music composed by his son that was inspired by the Masai giraffes, along side Tim Dawson, during a media unveiling announcing Zoophony, a joint partnership between the Toronto Zoo and the Toronto Symphony Orchestra, in Toronto, Tuesday, Oct. 5, 2021. THE CANADIAN PRESS/Tijana Martin

TORONTO -- The Toronto Zoo and Toronto Symphony Orchestra have joined forces to produce a concert inspired by the sounds of animals.

The organizations announced a new creative partnership Tuesday, which involves orchestra musicians performing at the zoo.

The performance -- dubbed Zoophony -- will be filmed at the zoo and a recording will be released to schools on Nov. 22

The CEO of the Toronto Zoo says the partnership came about after the two organizations brainstormed ways in which they could serve the community during the pandemic.

Dolf DeJong says the zoo and the orchestra wanted to reach students who may need new ways to connect with nature.

Double bassists Tim Dawson and Paul Rogers say one of the concert's songs, which was written by Rogers' son, was inspired by Masai giraffes at the zoo.

In one section, the music mimics low humming tones that giraffes make when they gather together at night.

"We've never done anything like this," Rogers said after he and Dawson played a sample of the music at the zoo on Tuesday. "This is a lot of fun."

DeJong said the Toronto Zoo looks forward to continuing its work with the orchestra to find new and creative ways to serve the community.

"The arts are such a powerful and important way to connect people with nature and nature needs all the help that it can get," he said.

This report by The Canadian Press was first published Oct. 5, 2021.