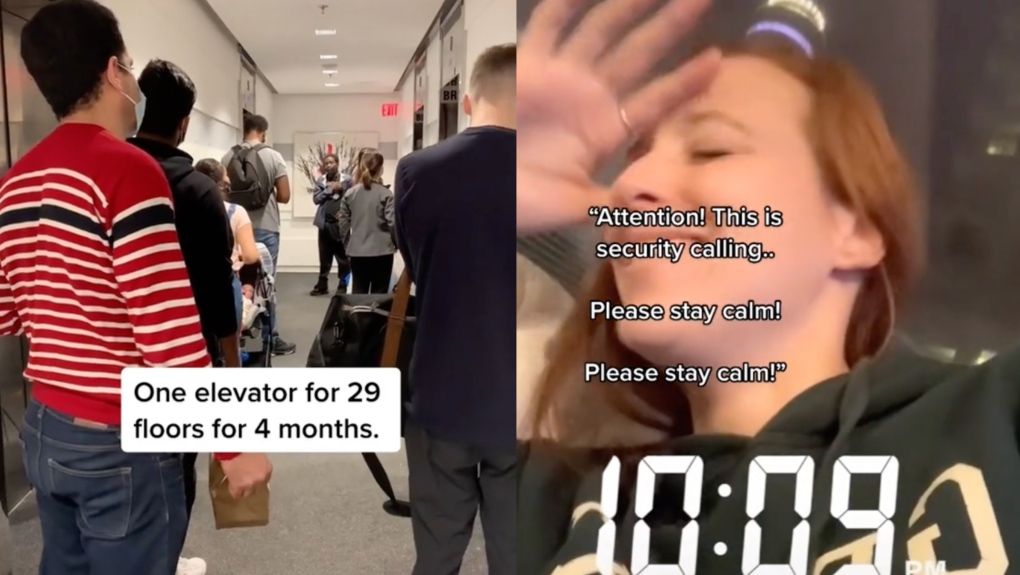 A TikTok video posted by a Toronto woman allegedly exposes the living conditions in a well-known condo building that she said she couldn’t wait to escape.

The video, which 27-year-old Kylene Loucks says features clips taken inside Ice Condos, located at 12 York Street, garnered 300,000 likes on TikTok after it was posted last month and was soon shared across various social media platforms.

Loucks moved to Ice Condos in July of 2020. She lived in the building for one year.

Within months of arriving, Loucks said the building’s major deficiencies became clear to her.

In the video, she lists a myriad of issues — frequent fire alarms, a lack of maintenance, a heavy police presence, long lines for elevators, a lack of social distancing, and multiple instances where stray bullets struck the building.

“There was constantly a stench of garbage and trash in the halls and stairways because the garbage chutes were never operational,” Loucks told CTV News Toronto. “One elevator had been down since the day we moved in.”

With 29 floors and COVID-19 health and safety protocols limiting how many people could enter an elevator, she said lines were long and residents often became irate.

“The elevator was a huge source of anxiety for me,” she said. “Incidents around the elevator could quickly turn physically aggressive and multiple people were involved in altercations.”

She said that social distancing in the elevators was often not enforced.

“It wasn’t uncommon for nine people to pile in an elevator that was reserved for three.”

Loucks said she felt unsafe while in the building, adding she believed “there were more Airbnb guests than actual building residents,” and that police were frequently called to the building during her time there.

In February, Ice Condos was the scene of an incident that saw bottles tossed onto a busy downtown street from a party in a short-term rental suite.

♬ Act 2: In the Hall of the Mountain King - Edvard Grieg

Loucks said she tried to lodge a complaint with management about her experience, but said the issues were never resolved.

She also reported an incident to Toronto police on March 6, after the building was hit with multiple bullets.

When reached for comment by CTV News Toronto on Loucks’ claims, Ice Condos' Board of Directors issued a statement saying that they are “committed to taking actions that allow residents to feel proud to call Ice Condominiums their home.”

“Our maintenance team conducts frequent inspections of the building and rectifies issues promptly,” the statement said. “Currently, all 16 elevators are running.”

The Board said that while an elevator outage may sometimes last a few weeks (if a part is on-order or if a detailed safety inspection is required) there have been only eight incidents in the past six months when an elevator was down for longer than two days.

“Because the condominium is located in the core of the city, adjacent to Union Station and Scotiabank Arena, most of our residents understand that incidents that occur around the building are often unrelated to the condominium itself and beyond its control,'' the statement said.

Loucks said that, at one point, she asked her landlord about the possibility of ending her year-long lease early in an effort to get away from the building, but he declined.

“So then it became a countdown until we could escape,” she said. “We stayed inside the apartment as much as we could, and on the advice of the security guards, avoided groups of 4-5 people in hallways and lobbies.”

Loucks is no longer living in the Ice Condos and said she waited until moving out to post the TikTok video to her account.

She said she shared the video to show others what living in the condos can be like.

“I decided to share it because I’m hopeful that people in the GTA will see it and not make the same mistake we did by not researching the building before signing a lease,” she said.

“Looking back, the anxiety that place caused was catastrophic for me. I still dream about being trapped in the apartment which is irrational, but it still happens.”