“For me, being in isolation and not being able to go out and see people and touch people and hug - that’s really been hard,” she told CTV News Toronto. “I’m a real social person.”

The retiree was looking for a fun way to pass the time and connect with her friends on social media when she came up with an idea.

“I decided, hey, I’m going to start wearing costumes,” she said. “I’ll make it something fun, it will give me something to wake up for. And that’s what I’ve been doing for 47 days.”

Every day, Berenbaum dons a different costume, takes a photo and posts it on Facebook – usually with a witty or punny caption. The outfits range from old Halloween costumes to items she’s collected for her Red Hat Society events – some she’s even created at home.

“I’ve dressed up as a pizza, a mermaid, a clown, a goldfish,” Berenbaum said. “I’ve done so many costumes that I can’t keep track of them all.”

Logan Lass, Berenbaum’s niece, said she eagerly awaits her aunt’s social media posts to see what creative costume she has come up with next.

“Every day it’s something new, and every day it’s a crazy ridiculous-looking outfit,” Lass said, adding that the comments have been “hysterical.” 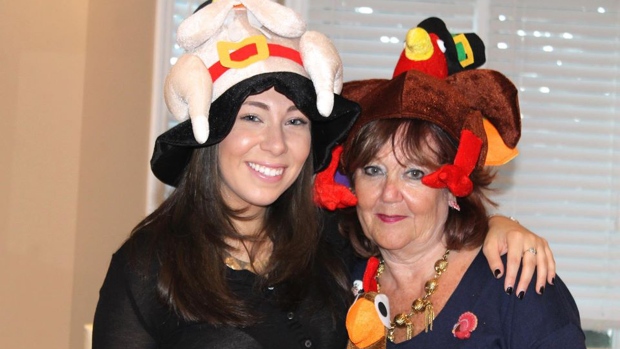 “People message her that ‘you really brightened our day,’ ‘this is incredible,’ ‘thank you for brightening our spirits,’” Lass said. “It’s just so nice to see that something as simple as putting on a hilarious costume can really make all the difference during this unprecedented time.”

Berenbaum said she is heartened by the reactions of her family members and friends.

“It made me feel really happy to make people laugh. As I was posting them, people were commenting and they were saying, ‘you’re making our day. We look forward to you doing this.’”

The most frequent question Berenbaum gets is where she keeps all of the costumes, especially considering the fact that she and her husband live in a condo.

“She has tons and they’re quite elaborate if you ask me,” Lass said.

With stay-at-home guidelines continuing indefinitely, Berenbaum said she’ll keep the fashion show going. She encourages others looking for a fun way to pass the time to do the same.

As for when the pandemic is over?