TORONTO -- Harrianne Kronick was supposed to celebrate her 100th birthday at a golf club, but like everything else in the world right now, it was cancelled due to the COVID-19 pandemic.

Instead of a grand party to mark the special milestone, her family organized a drive-by on Saturday afternoon at Dunfield Retirement Residence, near Yonge Street and Eglinton Avenue, where Kronick resides.

Decorated with colourful balloons and posters with heartwarming birthday greetings, a slew of cars drove by in front of the home as Kronick, watched through the window.

As family and friends stopped for a moment to wave at her and blow kisses, Kronick was seen smiling, waving back at them.

Described as pragmatic, friendly, and a true matriarch who steered her family through generations, Kronick, who was born on May 16, 1920, continues to enjoy life, her family said.

"We really wanted her to have something to lift her spirits because she's been pretty down," said Kronick's daughter Sareh Wodlinger.

Before COVID-19, the centenarian enjoyed playing bridge with her friends and acquaintances at the home.

Wodlinger said everybody loves her mother, describing Kronick as a "rare bird."

But due to the pandemic, socializing has been restricted. Families have been forced to do window visits with their loved ones in long-term care and retirement homes.

Wodlinger said the one visit she had with her mother was over a fence in the backyard of the retirement home.

Her mom described the retirement home where she's been in isolation for months as a prison, Wodlinger said.

"It's just been crazy," she said, adding that not being able to have physical contact with her mother has been tough. 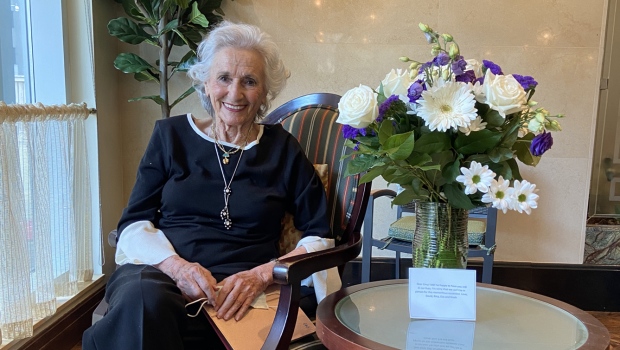 Wodlinger said she is thankful that her mother is healthy and is able to know what's going on.

Joel Lavine said the drive-by would provide a good boost of morale to Kronick, who was his longtime neighbour.

"An amazing lady who's gone through a lot of things in life, but still here she is a hundred and still laughing and smiling and on the right side," Lavine said.

"To see all these people come out, friends from way back and family, I'm sure it means a lot (to her)."