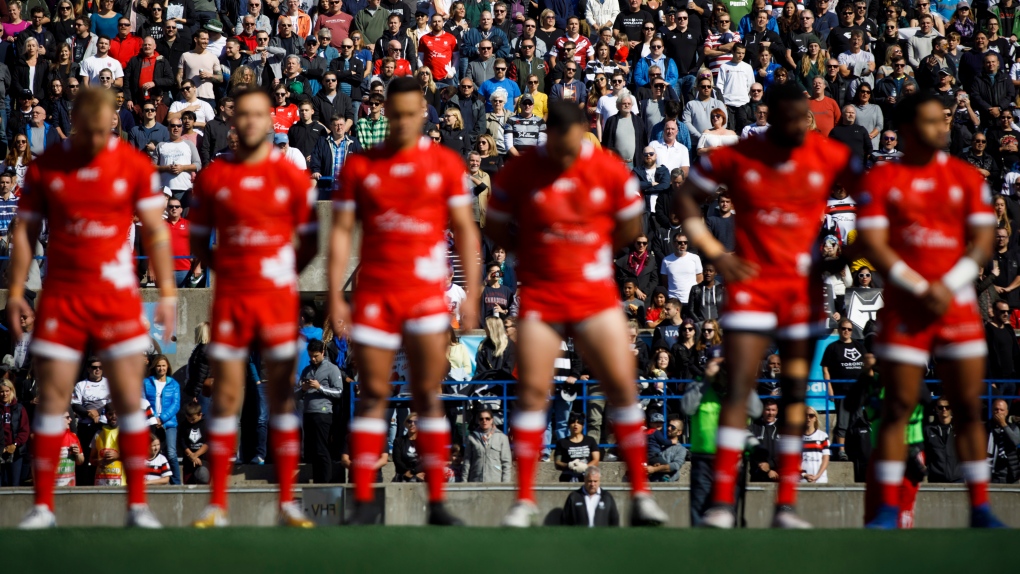 Fans look on as the Toronto Wolfpack team lines up for the Canadian national anthem ahead of the Million Pound Game in Betfred Championship rugby league action against the Featherstone Rovers in Toronto, Saturday, Oct. 5, 2019. THE CANADIAN PRESS/Cole Burston

TORONTO -- The Toronto Wolfpack will be walking advertisements for one of their own products in 2020 with the brand Rugby Strength, a CBD-infused body cream, featured on the front of their jerseys for the Super League season.

Air Transat adorned the jerseys of the transatlantic rugby league team in its first three years of existence. A Wolfpack spokesman says the club is finalizing a new deal with the airline, whose name will still be on the jersey but not on the front.

The Wolfpack and HowlBrands, a wholly owned subsidiary, announced last May that they were partnering with Vancouver-based companies International Cannabis Corp. and Organic Flower Investments Group Inc. to launch a line of athlete-focused cannabidiol products.

"Our profile as a global sporting team is ever-expanding and Rugby Strength plays a key role in this," Wolfpack CEO Bob Hunter said in a release Monday. "We are delighted to be in the rapid-growth market of CBD pain-relief and alternative, natural medical solutions to ever-present problems athletes and others face in their lives."

According to its website, Rugby Strength "is for the gladiator writhing in each of us, for the connoisseurs of high-contact, for the adrenaline junkies craving their next impact, for those willing to push the body past its breaking point. Rugby is not a sport, it's a form of life."

The team will wear the new jersey for the Jan. 19 pre-season game against Castleford Tigers, which doubles as a testimonial for Castleford veteran Michael Shenton.

Toronto Wolfpack are thrilled to announce that @rugby_strength will feature on the front of the team’s playing jersey for the upcoming 2020 Super League season.

The jersey is to be unveiled next week.

Rugby Strength is currently on sale in the U.K., with launches in other countries planned for early this year. The company is awaiting the final word from Canadian authorities on regulations on hemp-derived CBD products.

This report by The Canadian Press was first published Jan. 7, 2019.