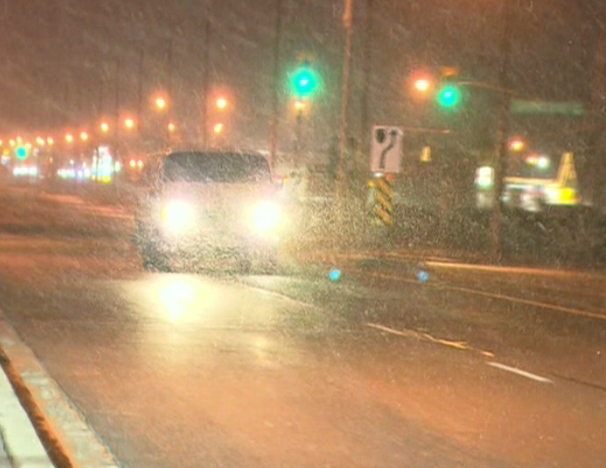 After getting no snow all November, parts of Toronto got a sprinkling early Tuesday, Dec. 1, 2009.

Snow was a no-show in November but the first hours of December saw a light dusting of the white stuff in Toronto's north end.

The area around Steeles Avenue and Dufferin Street saw light snow fall at around 3 a.m., just hours after Toronto ended a month-long streak by not having any traceable amounts of snow on the ground.

According to Environment Canada's records, this is the first time in recorded history - 70 years - that snow has not fallen in the city in November. Dave Phillips, a top climatologist with Environment Canada said earlier notes suggest the warmer November weather may have broken a 162-year record.

Snow was also reported throughout the Vaughan region.

Monday night's snow melted by sunrise but nonetheless, the winter weather prompted police to warn commuters about driving at high speeds Tuesday morning and to be mindful of slippery roads.

Phillips told CTV's Canada AM on Tuesday that there will likely be less snow this year across the country.

He explained that the season has seen moderate El Nino breezes -- the warm currents that come off the Pacific region. He said when the El Nino breezes are intensely warm, they can make their way all the way to the east coast of Canada but that this year, the tropical weather pattern has only wafted to Winnipeg.

"What happens is that the cold air that is pent up in the North does an end sweep so that we have the east freezing in the dark and the west basking in the sunlight and that's what we're seeing," he said.

Phillips said that results in warmer temperatures in the north and the west, near normal conditions in northern Ontario but cooler than typical weather in eastern Canada.

But the cold weather doesn't necessarily mean there will be a heavy dumping of snow, he said.

Phillips said the weather should co-operate nicely with the Olympics, especially in Whistler.

"Whistler is almost immune (to weather patterns). It's so high up -- 1,900 meters -- and it's not affected by these Spanish El Nino breezes.