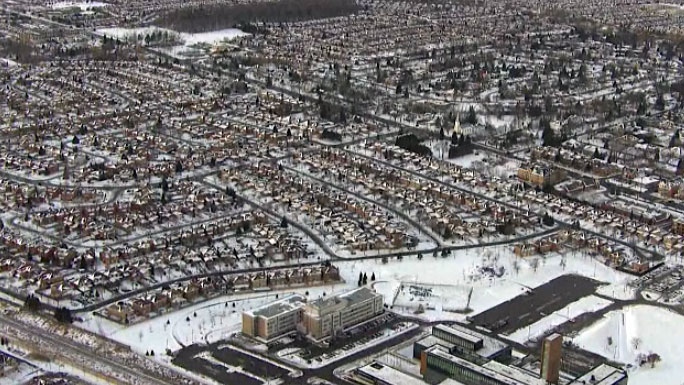 Snow-covered rooftops are seen from the CTV News chopper on Friday, Jan. 16, 2015.

An extreme cold weather alert was issued by the City of Toronto Friday, bringing the total to seven alerts so far this year.

It was -9 C in Toronto Friday morning, but it felt more like -17 C. Environment Canada is reporting that temperatures could drop as low as -20 with the wind chill overnight.

The Medical Officer for Health calls an extreme cold weather alert when Environment Canada forecasts temperatures will reach -15 C or colder. Alerts are also issued at warmer temperatures if the forecast includes factors that increase the possible impact on health including wind chill factor, precipitation, or several consecutive days and nights of cold temperatures.

Based on the data from the last ten years, the city calls an average of 16 alerts per year.

Last year, the city recorded the most extreme cold alerts in a decade, with 36 alerts from December 2013 to March 2014.

The majority of extreme cold weather alerts tend to fall between January and February, with 80 per cent of instances recorded during the two month period.

During cold weather alerts, Toronto Medical Officer David McKeown advises residents to check up on loved ones and those who may be particularly vulnerable.

Groups at risk include the elderly, infants, people with pre-existing heart or respiratory conditions and the homeless.