TORONTO -- Transit operators are saying that it’s taken too long for the Toronto Transit Commission (TTC) to respond to the COVID-19 pandemic, citing concerns about exposure and safety.

The wife of a TTC operator, who did not want to be identified, said that her husband is so worried about what he could be bringing home that he has been changing his clothing in the garage, and then bagging and immediately washing his garments.

He is also sleeping in another part of the house and limiting contact with his children.

Rocco Signorile, a former TTC operator and union representative, told CTV News Toronto on Saturday that he has been inundated with health and safety concerns from his colleagues.

"If a passenger can still come up to the front door, and talk and put their head around the operators shield, they're still able to spread the virus,” he said. “If (passengers are) transmitting the virus to the driver, the driver could be passing it on to the passengers. Every passenger they see, because there is no social distancing."

A little more than a week ago the TTC started to allow bus drivers to wear their own masks while on shift. Officials made the decision after previously refusing to allow employees to wear masks under the advice of Toronto Public Health.

After first allowing all-door access to buses to avoid “pinch points” and encourage social distancing, the transit agency changed its rules. Last week, the TTC announced that they were going to prohibit front-door entry to minimize contact with operators.

However, transit operators are saying that buses remain crowded, which makes them feel scared and uncomfortable. 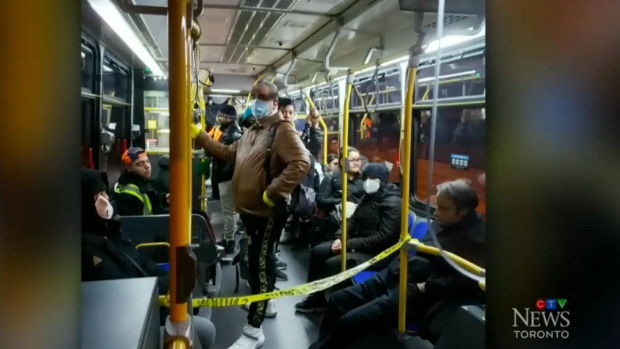 "It's crazy at work. I don't understand the decisions being made,” one TTC operator who did not want to be identified said.

“All we want is some kind of protection to keep the passengers back from us so we can do our job properly and stay healthy."

"They're taking the stance that if it's uncomfortable to get on a bus then the passenger should choose not to get on that bus. The drivers don't have that option,” another operator said. "This is a problem waiting to explode."

TTC spokesperson Stuart Green said that ridership on the TTC has dropped by about 80 per cent, but there are still people who rely on public transportation to get to work.

"The indication is that there's no increased risk to operator safety. That doesn't mean we're taking it for granted by any means,” Green said.

"What we're doing there is we’re deploying extra buses at the busiest time of day to address that, what would be called crowding now, but on a normal day would not be. So where we're having 15 or 20 people on a bus, maybe we want to get that down to say, 10,” he said on Saturday.

The following day the TTC reported that it is missing about 20 per cent of its workforce due to employees either calling in sick or self-isolating due to recent travel history or possible exposure to COVID-19.

Because of this, they have reduced service on a number of bus routes in the city.

“We're doing our best to provide as much service as our resources allow. Many routes are not able to strictly adhere to schedules. Service is allocated with priority to the busiest routes and to ensure all areas of the city have reasonable access to public transit,” the TTC said.