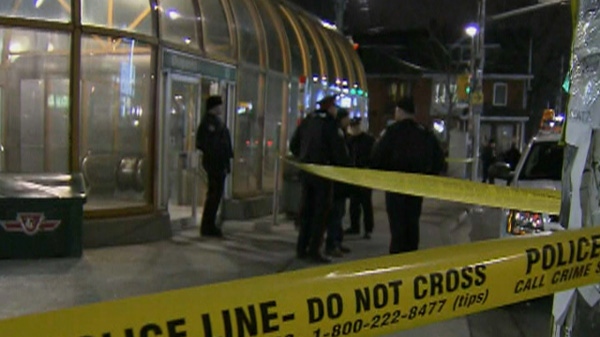 Officers are shown at the scene of a shooting at Dupont station, Sunday, Feb. 26, 2012.

A TTC ticket collector was shot inside Dupont station and rushed to hospital with life-threatening injuries Sunday evening.

The transit employee, believed to be in his mid-50s, was shot around 7:30 p.m. during an attempted robbery, police said.

Police are looking for the shooter and an investigation is underway. Subways are bypassing Dupont station, which remains closed.

He has called a meeting Monday morning to discuss TTC's safety measures.

"I will not have people attacking my staff," Byford said.

The injured ticket collector is a long-time TTC employee, he said.

Mayor Rob Ford issued a statement late Sunday saying he was "deeply saddened" by the incident.

"I would like to extend my thoughts and prayers to the family and friends of the TTC collector during this most difficult time," Ford said.

Byford said an alarm in the collection booth was also activated during Sunday night's shooting.