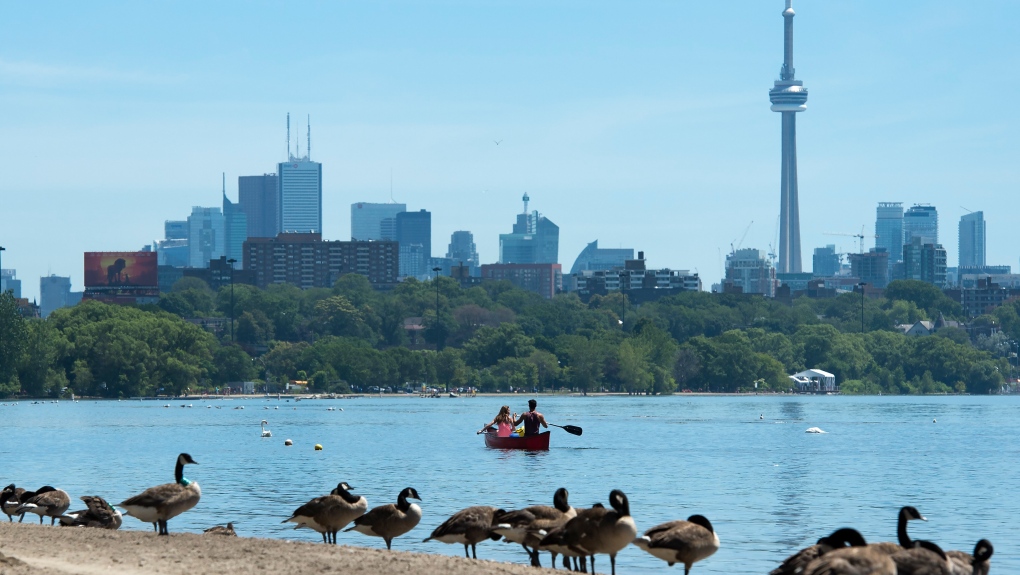 Canadian Geese watch on the beach as people paddle in a canoe on Lake Ontario in Toronto on Monday, July 15, 2019. THE CANADIAN PRESS/Nathan Denette

TORONTO -- Toronto officially welcomes the first day of summer on Sunday and this year, the city may see a warmer and wetter summer than normal, Environment Canada Senior Climatologist Dave Phillips says.

"We've already found out where our linens are and how to make those summer drinks, get the fan working, the air conditioning," he said.

Phillips said so far this year, Toronto has seen a number of hot and humid days with the mercury rising above 30 C.

"I think we have had a total of six days where the temperature has been above 30. That's a mark of a warmer than normal summer," he said. "June has certainly almost been about three degrees warmer than normal."

Phillips said while the models for July, August, and September appear to be warmer than the average summer, it likely won't be quite as hot as last year.

"I think you'd have to go back 12 years to find a cooler than normal summer in the Toronto area. So it is almost as if it has just become expected," he added.

"My sense is this is going to be the Goldilocks summer. Not too hot, not too cold, just right."

He noted that Toronto may also see slightly more precipitation than normal this summer.

Environment Canada is calling for a high of 28 C today but the temperature will feel closer to 35 when factoring in the humidity.