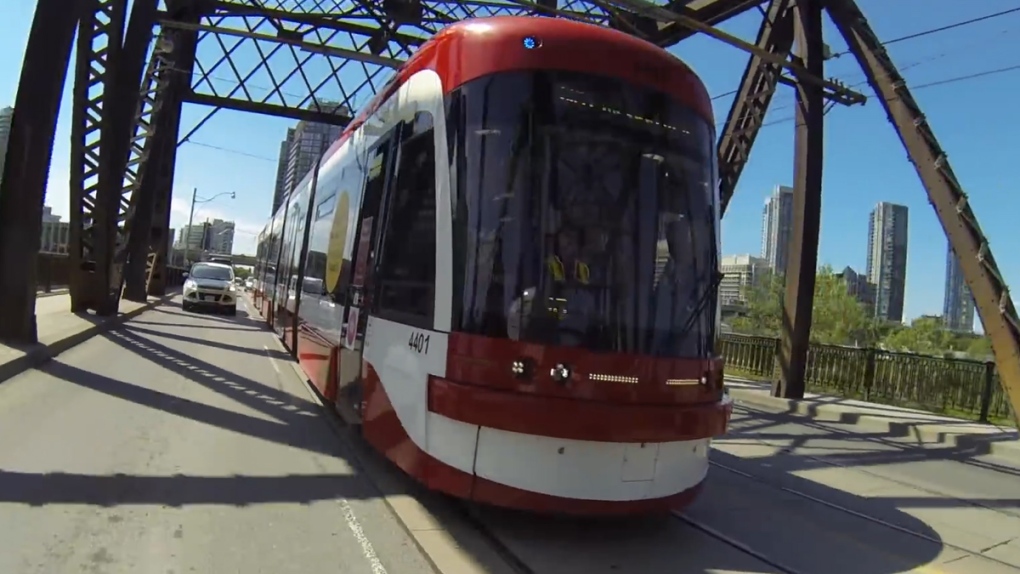 The new TTC streetcar is shown in this still photo from a demo video. (YouTube / TTC)

TORONTO -- Toronto will receive $360 million in funding from the federal and provincial governments to move forward with the purchase of dozens of new streetcars from the same Thunder Bay plant that produced the city’s last problem-plagued order of the low-floor vehicles.

The city had already approved the purchase of 13 new streetcars from the Alstom plant in Thunder Bay back in October but will now be able to move ahead with an option to purchase 47 more with delivery of the vehicles starting in 2023.

The total cost will be $568 million with the city covering a little over one-third of the bill on its own ($208 million) and the provincial and federal governments chipping in the rest.

The federal money is part of a $12 billion investment in GTHA transit that was announced on Tuesday. The bulk of that money, about $10.7 billion, was set aside for the construction of four new rapid transit projects, including the Ontario Line.

“This adds 47 new made in Canada streetcars to the 13 new streetcars that the City of Toronto moved forward with purchasing last year,” Mayor John Tory said during a press conference “We stepped up first as a city and that proved to be an important event in bringing us to today. This three-way partnership will ensure 60 new streetcars will be on our streets starting in 2023 and 2023 isn't far away. We need to make these investments now to make sure the vehicles are here when we need them in the not too distant future.”

Toronto previously purchases 204 streetcars from the Thunder Bay plant when it was operated by Bombardier and that order was plagued by a series of delays that forced the transit commission to rebuild some of its worn-out and decades-old vehicles in order to keep up with service demands.

It also took legal action against Bombardier in an attempt to recoup some of the additional costs it faced.

The plant, however, is now being operated by Alstom after the French company purchased the entirety of Bombardier’s rail division last year and Tory expressed confidence in its ability to fulfill the terms of this new contract on Wednesday.

TTC Chair Jaye Robinson also said that the language in the new contract around damages are “the strictest in North America,” further proof that the city “has learned from the past.”

“I will acknowledge that there have been some issues in the past with respect to delivery, and there were some very early issues with respect to the streetcars themselves but like most issues of its kind when it comes to a new product coming off the line and it's early use, those problems I think are on their way to resolution if not resolved,” Tory said on Wednesday. “I would also say that at the tail end of the of the original contract the streetcars were coming on the schedule prescribed by us and the manufacturer and the streetcars have performed well on the streets of Toronto.”

The new streetcars are part of a wider vehicle procurement strategy that the TTC board approved in October that also involves the purchase of 1,422 new electric buses, 522 new Wheel-Trans buses and 80 new subway trains.

The full plan carries a cost of $4.81 billion, the majority of which remains unfunded.