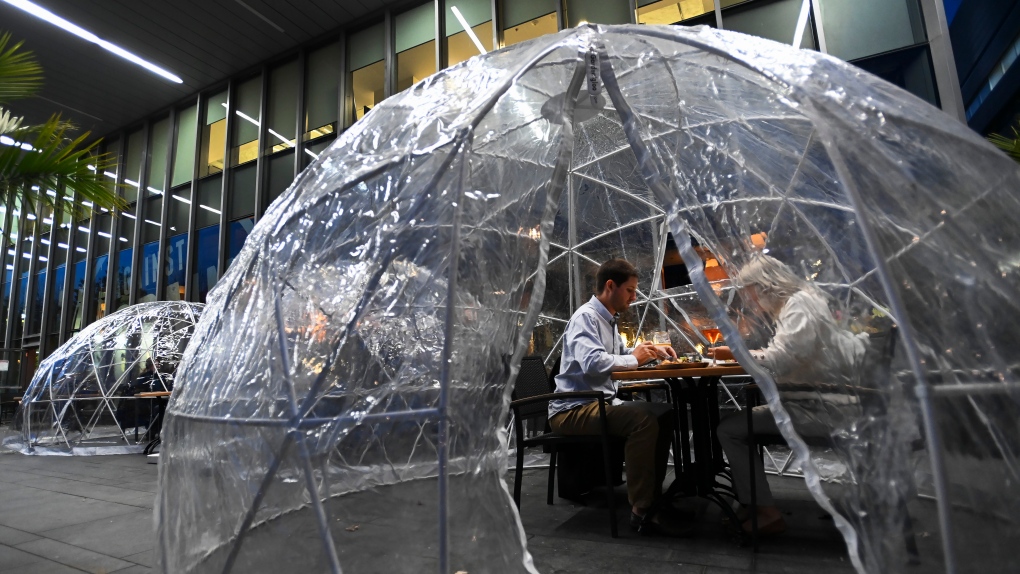 People enjoy outdoor dining in a weather proof dome pod at Against the Grain Urban Tavern during the COVID-19 pandemic in Toronto on Wednesday, October 21, 2020. THE CANADIAN PRESS/Nathan Denette

TORONTO -- Toronto’s top doctor says she believes the city hasn’t seen the full impact of tighter restrictions imposed by the Ontario government more than two weeks ago to curb the spread of the virus, as cases continue to trend upwards across the province.

On Monday, the city logged 300 new cases of the virus and three additional deaths. Toronto's death toll from the novel coronavirus now stands at 1,353.

A total of 132 people are currently hospitalized with the virus in Toronto.

The city recorded 346 new infections on Sunday and 371 cases on Saturday.

Although numbers appear to be declining in the city, Toronto’s Chief Medical Officer of Health says it’s too early to see the impacts of reverting the city to a modified Stage 2.

“I actually think we need to be watching further. It does take some time,” Dr. Eileen de Villa said during the city’s COVID-19 press update on Monday.

“The kinds of cases and the case counts we’re seeing today are the result of infections that were acquired about two weeks ago… I don’t think we have yet seen the full impact. I look forward to seeing what comes in the next few weeks.”

Toronto, along with Peel Region, and Ottawa have been in a modified Stage 2 since Oct. 10, which forced indoor dining, gyms, movie theatres and casinos to shut down.

The provincial order is in effect for 28 days in an effort to reduce transmission of the virus in these COVID-19 hot spots.

York Region reverted to Stage 2 a week later, leaving Durham and Halton as the only regions in Stage 3 in the GTA.

Following a record-high weekend of new infections across the province (978 new cases on Saturday and 1,042 on Sunday), Ontario recorded 851 new cases on Monday.

With only 28,700 tests processed yesterday, Ontario's test positivity rate now stands at 2.9 per cent, up from 2.6 per cent on Sunday.

De Villa, along with other health officials, are attributing the rise in cases, in part, to gatherings over the Thanksgiving holiday.

“There are a number of reasons for which we’re seeing what we’re seeing now in respect of numbers. Certainly the potential for gatherings at Thanksgiving would be one of them,” de Villa said.

She added that the next few weeks will be a key indicator of whether the stricter measures are having an impact on slowing transmission in the city.

“We are hoping that within the next couple of weeks we should be seeing some of the impacts not only of the measures that have been taken at the government level in order to try to reduce spread but also I’m hoping we’re going to see the evidence of the people of Toronto and frankly the people of the entire province to really do their best, to engage in those self-protection measures for all of our benefit,” de Villa said.