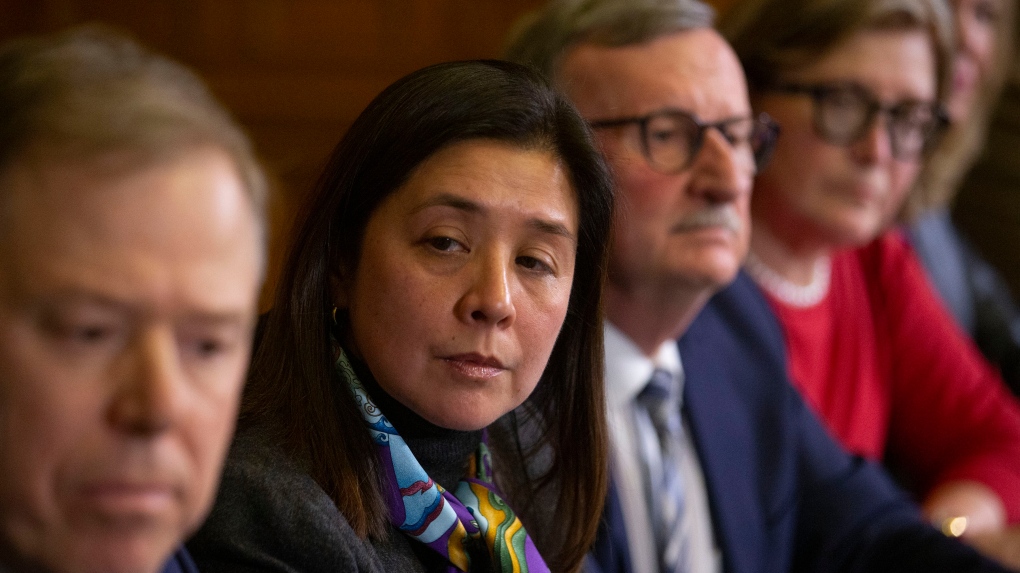 Dr. Eileen de Villa, second left, Medical Officer of Health for the City of Toronto, sits alongside Dr. Andy Smith, left, President and CEO of Sunnybrook Health Sciences, as they attend a news conference in Toronto on Saturday, January 25, 2020, as officials announce that Canada's first presumptive positive case of the Coronavirus is being treated at Toronto's Sunnybrook Health Sciences Centre, after arriving on a flight from China. THE CANADIAN PRESS/Chris Young

TORONTO -- Toronto’s top public health official is recommending that the city establish a quarantine facility to “support members of the general population who need to self-isolate but are unable to do so safely.”

The recommendation is contained in a report by Medical Officer of Health Dr. Eileen de Villa that was considered during a virtual meeting of the city’s board of health on Thursday morning.

In the report, de Villa says that idea behind a centralized quarantine facility would be to provide a safe space where “specific groups of cases and contacts where home isolation or quarantine is likely to be suboptimal” could reside.

“An example of this would be people who live in large, crowded households where adequate space is not available to follow isolation or quarantine guidelines,” she said.

De Villa said that Toronto Public Health has already done “some analysis” of the potential benefits of a central quarantine facility, which has included an examination of efforts undertaken by several American cities.

She said that the City of Chicago has set up an isolation facility in a hotel where COVID-19 patients who “lack an appropriate setting to isolate” can recover, provided that their case is mild and that they do not require medical treatments. She said that officials in New York City, meanwhile, have made 1,200 hotel rooms available to COVID-19 patients who similarly lack the ability to isolate in their own homes with plans to increase that number to 3,000 by the end of the summer.

A motion, which was ultimately unanimously approved by the board, directs staff to engage with the provincial and federal governments in discussions regarding the establishment of a central quarantine facility as well as “other methods to achieve effective isolation for individuals who are unable to safely and effectively isolate at home.”

“The risk of COVID-19 shouldn't depend on where you live, how much you make, or how many bathrooms you have in your home,” Board of Health Chair Joe Cressy said in a press release following the meeting. “We need to do everything we can to mitigate vulnerabilities to this virus, and to make sure everyone has an equal opportunity to reduce transmission and protect their loved ones. In this case, that means working with our government partners to make sure people have somewhere to go if they can't safely self-isolate at home.”