The Taste of the Danforth has been called off.

Despite six months of talks with the city to address “logistical issues,” organizers of the popular three-night, two-day event said they just couldn’t make it work and have decided to “reimagine” this year’s event.

“The short timeline available to adapt the event to the changes in the street meant that Taste of the Danforth in 2022 was at too great a risk of not being as successful as in the past,” the Greektown on the Danforth Business Improvement Area (BIA) said in a statement posted to Twitter.

“Our membership and the broader community have high expectations for a great event.”

The business association said instead it would be hosting “localized” events on the strip.

“So now we’re going to take the time, working hand in hand with the city and all our partners, to put on the best Taste of the Danforth ever in 2023,” the BIA said.

Earlier this month, the BIA reiterated its request to remove designated bike lanes and curb lane CafeTO patios during the event.

At that time, City of Toronto spokesperson Brad Ross said Taste of the Danforth organizers must accept this “new reality,” if they want to move forward with their event.

On June 1, he said removing and reinstalling bike lanes and curbside patios is a “significant undertaking.”

“We are looking at least, at a minimum, nine days of disruption in terms of removing bike lanes and CafeTO installations and then having to reinstall them,” Ross told CP24.

Today, he said the city’s “understands” the BIA’s decision and appreciates that the “best way to ensure the long-term success of the festival is to postpone restarting it until 2023.”

In a statement provided to CP24, Ross said the city would “continue to work collaboratively with all BIAs on festivals, and looks forward to working with the GreekTown on the Danforth BIA on a reimagined Taste of the Danforth in 2023.”

He also said the city would help Greektown on the Danforth BIA “in any way it can as it brings localized events to the Danforth this summer, where music, food, and the vibrant community the Danforth is known for can be enjoyed by all.” 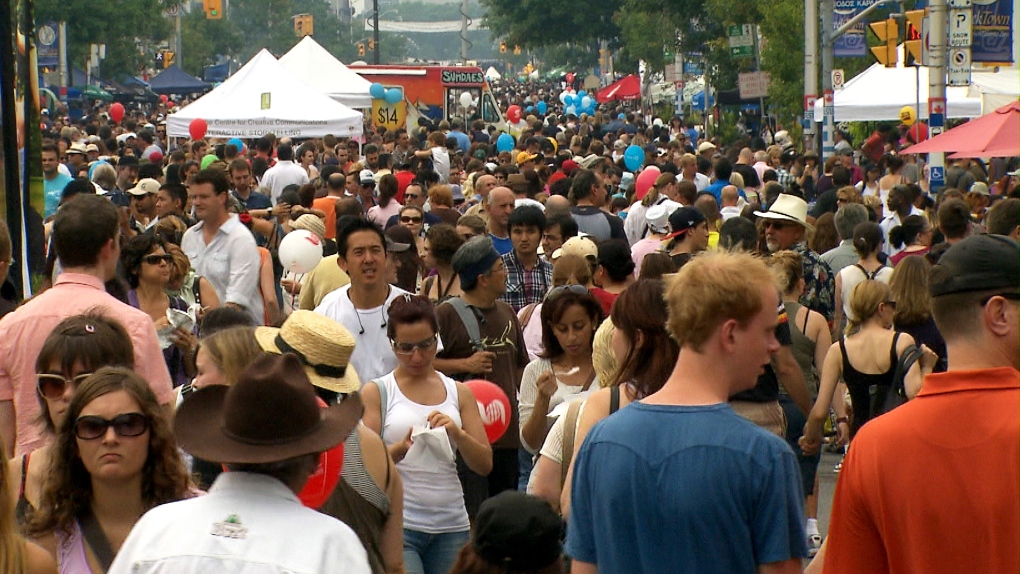 Visitors of Toronto's Taste of the Danforth festival are seen here in this undated photo. (CTV News Toronto)

Mayor John Tory said he, too, supports the Greektown on the Danforth BIA in “whatever decision” it makes for Taste of the Danforth “because they have built the event up into the success that it is and they will know best how to continue that success.”

He also vowed to lend his support to the festival’s reimagined event in 2023 and the association’s local events this summer.

“Now that the work is underway to ensure a reimagined Taste of the Danforth next year, I know City staff will continue to work with the BIA and all festival organizers across the city to support this event and all the great events across Toronto” added Tory, who urged “everyone to visit the Danforth throughout the summer to partake in the vibrant patio culture with food from every corner of the world.”

“I encourage people to get out this weekend and support businesses along the Danforth and across the city – summer is here, patios are open and it's time to dine out and dine often.”

Local Coun. Paula Fletcher also said she also respects the BIA's determination that the “best option for bringing back a successful Taste of the Danforth is to reimagine the event for 2023 to allow for an additional year of planning for this very popular street festival.”

“Like so many residents in Toronto-Danforth, I will be celebrating the vibrant business community and street atmosphere in GreekTown this summer with their 32 CaféTO patios and live music on the street, and welcome residents from across the city to join us and to keep strongly supporting our local businesses,” the Toronto-Danforth rep said in a statement.

“I am confident that when Taste returns to the Danforth it will be well worth the wait.”

Following a two-year pandemic hiatus, Taste of the Danforth was set to run Aug. 5 to 7 on Danforth Avenue, from Broadview to Donlands avenues.

Considered one of Canada’s largest street festivals, it was expected to welcome an estimated 1.6 million visitors over three days.

In 2019, the event had an economic impact of approximately $70 million, organizers said.

A top executive at former U.S. President Donald Trump's family business pleaded guilty Thursday to evading taxes in a deal that could potentially make him a star witness against the company at a trial this fall.