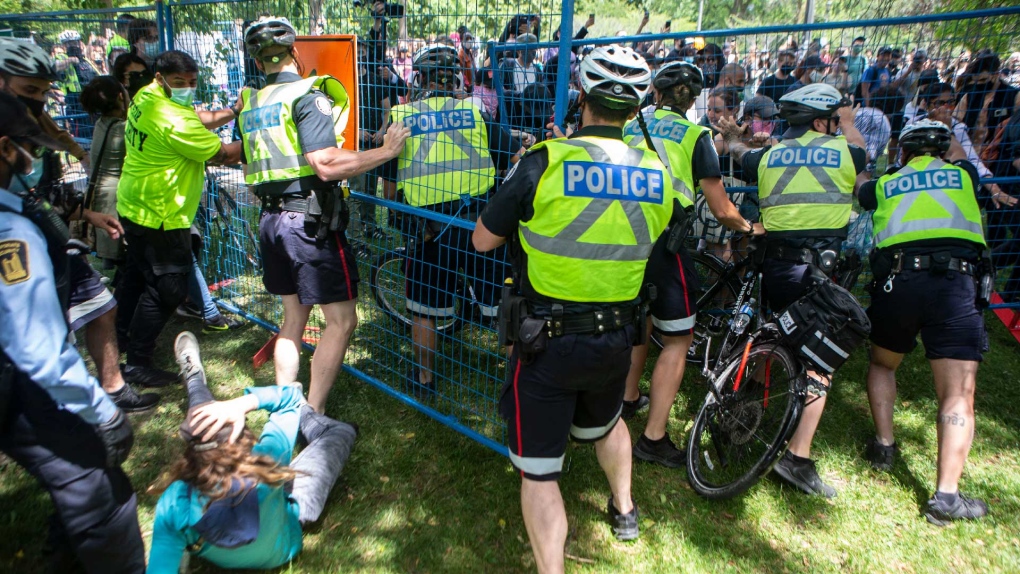 Police try to hold back protesters as they break through a fence during an eviction process at a homeless encampment in Toronto on Tuesday, June 22, 2021. THE CANADIAN PRESS/Chris Young

Toronto’s ombudsman says he will be conducting an investigation into how the city handled clearing homeless encampments at a number of parks this summer after he said his office received complaints from citizens.

“We have received complaints that raised concerns about the City’s approach to the encampment evictions,” Toronto’s Ombudsman Kwame Addo said in a written statement released Tuesday. “I have formally notified the city manager of the launch of our investigation.”

Over the course of the summer, the city sent dozens of bylaw officers and uniformed police officers to remove homeless encampments at multiple city parks, including Trinity-Bellwoods Park, Alexandra Park, and Lamport Stadium Park.

The clearouts led to violent clashes between police and protesters and several arrests.

Critics have accused the city of mishandling the situation and a group of city councillors even penned an open letter to Mayor John Tory in July, urging him to adopt a non-violent approach to the encampment clearings.

“There is absolutely no need for batons, pepper spray or even guns, not when the work should be done by the City’s Streets to Home staff and other outreach workers,” the letter read.

“Your approach to encampments does not effectively resolve the challenge we face, as you are only moving people experiencing homelessness from the parks to laneways, under bridges or into another park. Absolutely no one voted for this extreme show of force that keeps happening under your authority.”

The city previously said the encampment evictions, which cost an estimated $2 million to carry out, followed months of engagement with encampment residents to try to get them to accept alternate housing. The city has argued that it had no choice but to clear the encampments because they were unsafe.

Tory has repeatedly defended the move to clear out encampments at parks, noting that he does not direct the police on how to enforce trespass notices.

As part of the investigation, the ombudsman said his office will speak to those who were involved but added that the probe will not assess the conduct of Toronto police officers as this is beyond its mandate.

“The investigation will focus on how the City of Toronto planned the encampment clearings, engaged stakeholders, and communicated with the public, as well as the policies and procedures that guided its actions,” the ombudsman’s statement continued.

“As part of its investigation, Ombudsman Toronto will be speaking to people involved in and affected by the clearances.”

Members of the public with information about the encampment evictions can contact Ombudsman Toronto at encampmentsombudsman@Toronto.ca or 416-392-7062.