TORONTO -- There are probably few people who know the streets of Toronto better than long-standing bus driver Barry Allen.

For just under 50 years, Allen told CTV News Toronto that he’s been driving for the Toronto Transit Commission.

"This has been a good job," he says with a laugh. "More than I've ever anticipated."

It was August 1972, when Allen first got behind the wheel of a TTC bus. The job, he admits, was not his first choice.

"I tried to get on with parks and recreation full time and there was no openings and the TTC was advertising driving jobs."

His first route was along Eglinton Avenue East, and he still wasn't sure it was for him.

"I said to the guy that hired me, Mr. Tarling, 'I’ll give it six months.' I had no idea what I’m getting into and when I saw him 20 years later he said 'have you made up your mind?' And I said 'no, it’s an ongoing stud.'”

At 71 years old, Allen gets out of bed at 2 a.m., in order to start his shift around 5 a.m.. These days he drives along Lawrence Avenue, although his career has taken him all over the city, from the east end to Dufferin Avenue where he drove for 26 years.

In his career, he's seen plenty of changes, from the busses, to the city, to the vehicles around him.

"A lot more traffic" Allen said. "No patience today. People run lights and things they normally wouldn’t do. They’re distracted by their phones and whatever they’re doing. It’s tragic to watch really."

With the TTC, Allen has had the chance to drive the subway, as well as drive highway coaches on weekend trips to places like Sudbury and London. But, after all of these years, Allen still believes the best parts of his job are the people who ride the bus.

"I love what I do. If I didn’t have fun at what I’m doing I wouldn’t come in but as long as I’m having fun I’ll show up."

Since the COVID-19 outbreak began, Allen hasn't missed a shift behind the wheel. Even though his doctor suggested he should consider not working, Allen decided he would keep driving in order to get the front-line workers to their jobs. 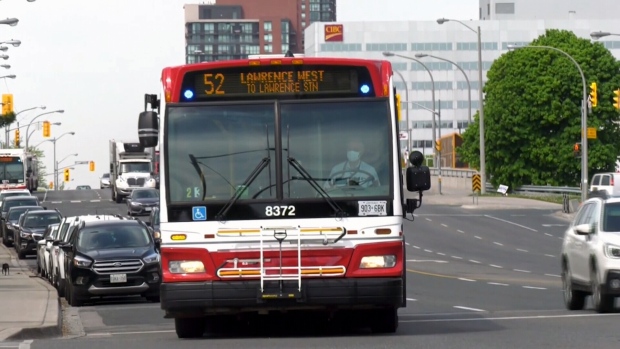 "In this pandemic you have to come out and help the workers that have to get to work. You never know when we might end up seeing them right?"

Allen wears a mask while on the job and he also has a plexiglass barrier that separates him from his passengers on the bus. He said he understands the necessity for the safety measures, but doesn't enjoy it.

"Until this pandemic came along you could still talk to them [riders], you could still have fun with them, but now you’re isolated," he said. "Hopefully someday we can get back to having fun with our passengers again."

Currently, Toronto's longest serving bus driver said he plans to keep driving throughout the pandemic to help ensure that health-care and front-line workers can get where they need to go.