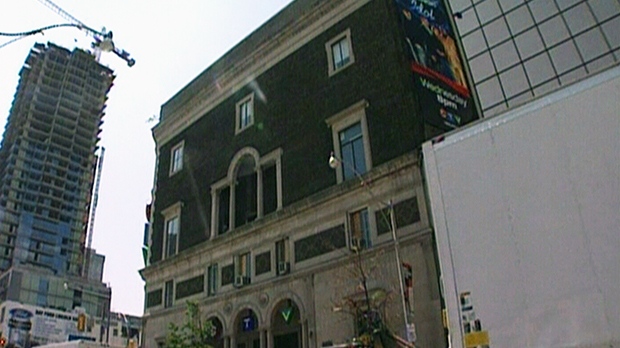 Info-Tech Research Group says it has paid $12.5-million for the historic building, which was most recently home to MTV Canada and previously hosted famous rock bands like the Rolling Stones and Led Zeppelin.

Info-Tech, which is headquartered in London, Ont., will renovate the downtown building to accommodate its Toronto satellite office.

Joel McLean, the company's president and CEO, says Info-Tech wanted a space that could house its employees, but also impress visitors from outside the country.

"We're consistently inviting company after company into Toronto (and) we wanted something that was spectacular to come see," he says.

"This spot not only offers an amazing space ... but it's got great history."

The six-storey building on Toronto's Yonge Street has served as a concert hall that hosted famous musicians like Frank Sinatra. It was also a favourite rehearsal space for the Rolling Stones.

McLean says he will maintain the spirit of the entertainment era with meeting rooms named after some of the more famous musicians that played the Temple. He also plans to decorate the space with memorabilia that harkens back to the building's rock star days.

The firm says it will also keep the main concert hall's design so that it can move out office desks for its annual black-tie charity rock concert. In 2014, it plans to host, with its clients, an unofficial opening night party for the Toronto International Film Festival.

The Temple will initially house about 150 company employees, though McLean says the plan is to eventually increase that to 300 company staff.

Built for the Masons in 1918, the group sold the building to The Rosedale Group in 1996. The new owners pledged to reopen the hall and transform it into a centre for the arts, but a year later announced plans to tear it down and build condos on the site.

The Toronto Heritage Board fought back and it was sold to CTV in 1997, which utilized its cavernous spaces as television studios. The smaller rooms, hardly larger than walk-in closets, became video editing bays while other small spaces became storage areas for archive footage.

Through the years, the Masonic Temple was home of the late night talk show "Open Mike with Mike Bullard" and various other CTV-owned programs including "eTalk Daily," "Canadian Idol" and TSN's "Off The Record."

BCE Inc. took control of MTV in 2011 after it completed its $3.2-billion acquisition of CTV, bringing 29 specialty channels under its wing.

McLean says that buying the Masonic Temple serves more than one purpose, and perhaps design isn't the priority.

"Some of the space just isn't practical," he says.

"But as a research and consulting firm -- and given who our staff are and who our members are -- I'll take grand over practical any day."