TORONTO -- For more than 40 years, it's been a staple of Koreatown cuisine.

From homemade noodles to an assortment of soups and stews, Korean Village Restaurant has been place for people to gather and dine for generations.

"It was started by my parents" owner Jason Lee told CTV News Toronto. "My mom and dad came from South Korea. They came to Canada, decided to open up a restaurant, and 42 years later we're still here."

Inside the kitchen, the restaurants original chef works to prepare his specialty dishes- he's been here since the beginning. So too has Lee, who grew up watching his parents run a restaurant, and build connections throughout the community. On the walls, dozens of printed photos showing his mother Ok Re Lee with celebrities, as well as family photos from those who've become regulars here. Last October, Lee's mother died, and he took over the family's restaurant.

"It was one of the hardest things I ever had to do,” Lee said. “I had to lay off the majority of our staff- almost 20 people." 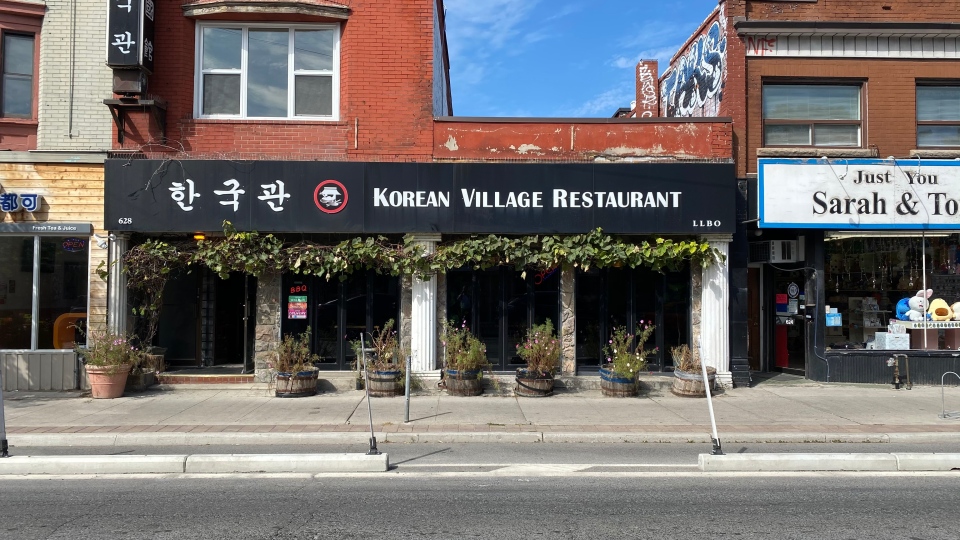 Barely surviving on take-out and delivery orders, Lee faced the decision as to whether or not he could afford to reopen at the end of July, when limited indoor dining was allowed in Toronto. Many of his staff had returned to Korea, or found other jobs and he didn't have the financial resources to hire new ones.

That's when his friends, like Andrew Oporto, realized how difficult the situation had become.

"I saw how stressed Jason was. The business wasn't here. I came in and it was a ghost town."

Oporto says he offered to help in any way he could, but wasn't sure that his offer was taken seriously.

"People don't ask for help, and they're always 'I'm fine, I'm fine'- and you can see them physically struggling. So I sat the guy down and I was like ask me if you need help- and he finally did."

"I just kind of thought 'ok great- thanks'. But once I talked to my wife I realized- oh my gosh we need some help. So we asked Andrew and he's been here- working here for two weeks and we haven't paid him anything yet,” Lee said.

For the past two weeks, Oporto, who normally works as a comedian and actor, has been waiting tables inside the Korean restaurant. And other than tips, he hasn't taken a dime to do so. Oporto says he hasn't been a server in over a decade, and the job comes with some challenges- including the fact he speaks no Korean.

"I don't know if you know Korean cuisine- there are a thousand little plates you have to bring out with each order that I had to get used to- including the names. Some of the Korean patrons that are regulars would stare at me and wonder why is this guy serving me?"

Oporto says he knows firsthand that the restaurant is more than just a business to Lee and his family, having visited it many times while growing up.

"(Lee) knows every single customer that comes in here. A lady just came the other day and brought him lasagna and tiramisu and a card, and she's been coming here for 20 years. He stops and he knows every single person's name here. And then I've met people through it so it's like- the reward for me is incredible. I love it.

Lee says he's still trying to figure out how to keep the restaurant afloat, but admits he couldn't have made it this far without his friends. Another friend has driven from Burlington just to wash dishes, and yet another has volunteered to serve.

Lee laughs when asked what his mother might think of his new volunteer staff member. "We've never had a non-Korean work in the front. I don't know how she'd think, I don't think she'd be upset but I'm hoping my mom would be proud that we're still carrying her legacy."

It's a legacy that Oporto says he'll help to keep alive at no cost.

"I'll be here as long as he needs, you know- so hopefully business starts booming here!"