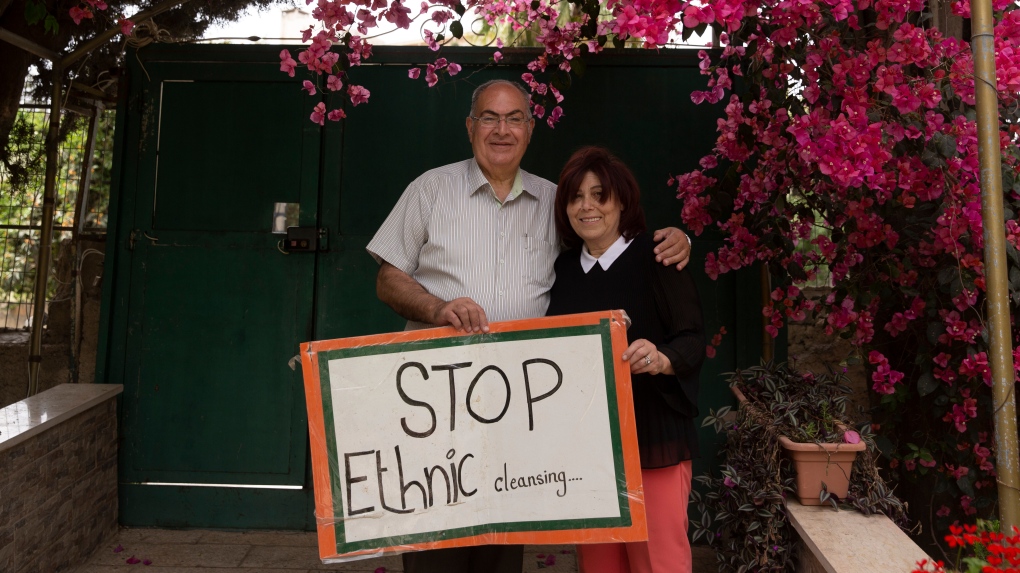 Samira Dajani and her husband, Adel Budeiri, pose for a portrait in the garden of their home, where she has lived since childhood, in the Sheikh Jarrah neighborhood of east Jerusalem, Sunday, May 9, 2021. The Dajanis are one of several Palestinian families facing imminent eviction from the neighborhood following a decades-long legal battle. (AP Photo/Maya Alleruzzo)

TORONTO -- Community members are holding an emergency rally in front of the Israeli consulate in Toronto to protest against the ongoing violence in East Jerusalem that’s left hundreds of Palestinians injured.

The violence comes following a series of sit-ins and protests over the pending eviction of Palestinians from homes on land claimed by Jewish settlers in the Sheikh Jarrah neighbourhood of East Jerusalem.

Organizers say the protest in Toronto is being held to condemn the violence by Israeli police and the pending forced evictions, which the United Nations’ human rights office has stated, “may amount to war crimes.”

Several Palestinian families are facing imminent eviction in the Sheikh Jarrah neighbourhood of East Jerusalem. The situation has highlighted an array of policies that rights groups call discriminatory and say are aimed at pushing Palestinians out of Jerusalem to preserve its Jewish majority.

The Israeli rights group B'Tselem and the New York-based Human Rights Watch both pointed to such policies as an example of what they say has become an apartheid regime. Israel rejects those accusations and says the situation in Sheikh Jarrah is a private real-estate dispute that has led to tensions.

Hundreds of East Jerusalem residents have been gathering each night for the past week to protest the evictions and have been met by ultra-nationalist Jewish protesters also carrying out rallies.

Latest reports state that more than 305 Palestinians have been hurt as Israeli police fired rubber-coated metal bullets, tear gas and stun grenades towards protesters at holy sites during the Muslim month of Ramadan.

Aid agencies have reported that 228 of the 305 Palestinians had to seek care in hospitals and clinics. Israeli police said 21 officers were hurt during clashes, including three who were hospitalized. Paramedics said seven Israelis were also hurt.

The protest in Toronto, which organizers say will be a peaceful demonstration adhering to public health measures, is taking place at 3 p.m. outside the Israeli Consulate downtown.

Hammam Farah, a board member with the Palestinian Canadian Community Centre, which is the organization behind the demonstration, said protesters are calling on the federal government to stand against the evictions and violence.

“We want Canada to impose sanctions on Israel. That is the main and central message,” he said. “This is not an issue between two equal sides when it comes to the balance of power. This is an issue of oppressor and oppressed, occupier and occupied.”

Israel has occupied East Jerusalem since 1967 and the country considers the entire city its capital, however, a majority of the international community does not recognise this.

Canadian Minister of Foreign Affairs Marc Garneau issued a statement on Saturday, saying that Canada is following the situation closely.

“Canada is committed to the goal of a comprehensive, just and lasting peace in the Middle East, including the creation of a Palestinian state living side-by-side in peace and security with Israel,” Garneau said in the statement.

“As a close friend and ally of Israel, Canada is deeply concerned that recent decisions on settlements, and demolitions and evictions, including in Sheikh Jarrah, would negatively impact livelihoods and undermine the prospects for a two-state solution.”

Farah said he’s hearing from community members in Toronto that they want to see stronger action from the Canadian government on the issue.

“We're tired of verbal condemnations. We're tired of expressions of concern about this issue,” he said. “The community is very troubled by what's happening. There's so much fear and there's anxiety.”

-- With files from The Associated Press' Joseph Krauss