TORONTO -- Flooding and power outages were reported across Toronto after a severe storm lashed the city on Wednesday afternoon.

A tornado watch was also issued by Environment Canada for Toronto. 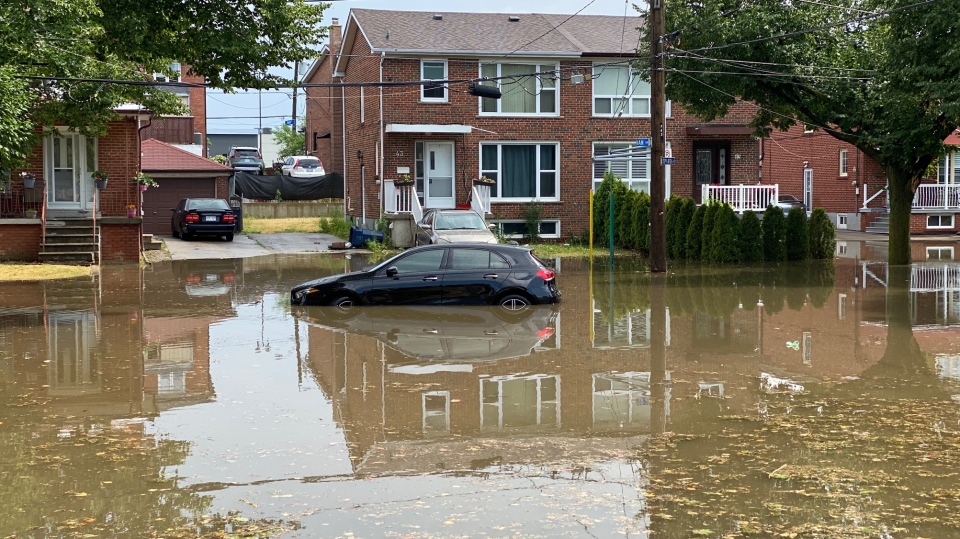 "Things have been changing quite rapidly and that's why we escalated it to a tornado watch," Environment Canada meteorologist Gerald Chang told CP24 at around 3 p.m. "It is moving very quickly but at the same time it's severe and it's giving a lot of rain and we are looking at 50 to 70 mm of rain in a very short amount of time."

"When we're talking about that rainfall amount, around 80 mm of rain is really the monthly rainfall for Toronto so this is quite significant and it could lead to flash flooding."

Throughout the afternoon, many residents in the west end of Toronto shared photos and videos of the results of heavy down pours in their area.

Wind storm in Etobicoke took my deck umbrella for a little ride. pic.twitter.com/6jb9a4xfXO

In the aftermath, police said they were "inundated" with 911 calls for service about downed trees, wires down and flooding. 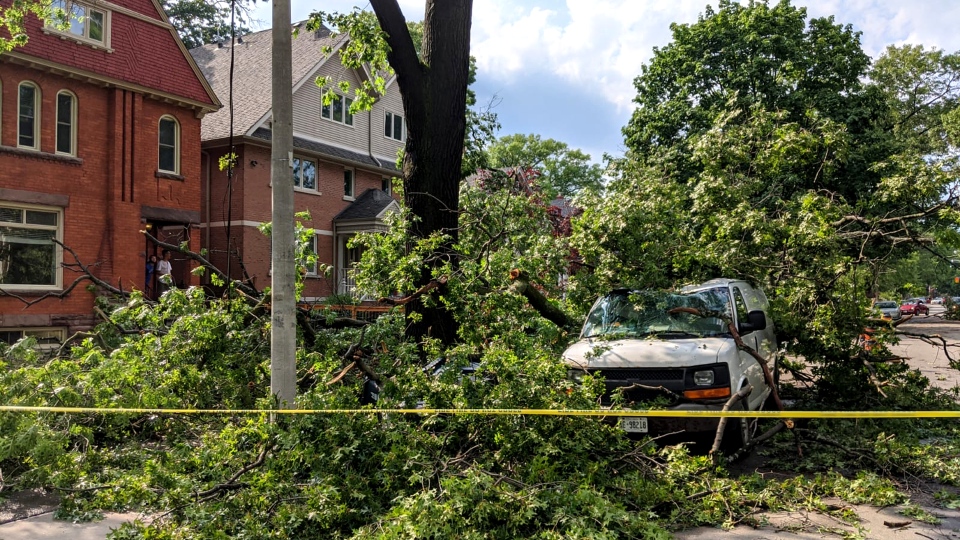 "We want to reiterate to please contact 311 and utilize that resource to rectify these issues," Toronto police spokesperson Alex Li said Wednesday. "We don't want our 911 lines to be tied up with non-emergency calls. Trees down, wires down or flooding should go directly to 311."

Meanwhile, Toronto Hydro said they were dealing with scattered outages across the city and are currently working to restore power.

We’re currently responding to scattered outages across the city. Crews are working as quickly & safely as possible to restore power, provided the conditions are safe & favourable to perform work activities.

We appreciate everyone’s patience today as we know it's hot out.

At the height of the storm about 45,000 customers lost power, Mallory Cunnington, a spokesperson for Toronto Hydro, said on Wednesday evening.

"It was a flash storm. It came in really quickly," Cunnington said. "But the damage that we've seen is extensive. We've seen power lines down, trees down in the area."

She said most of the remaining outages are in the city's west end.

"We do hope to restore power to a big chunk of customers tonight. However, there will be customers that will remain without power throughout the night and into tomorrow," Cunnington said.

"We are doing everything we can to restore power."

Rain is expected in Toronto throughout the afternoon but any active weather is expected to clear up into the evening and overnight.

With the humidex, the temperature in Toronto on Wednesday afternoon felt like 32 C. A high of 22 C is expected overnight in the city.

Sunshine is expected for Thursday with a high of 34 C before active weather is expected to hit again throughout the weekend.