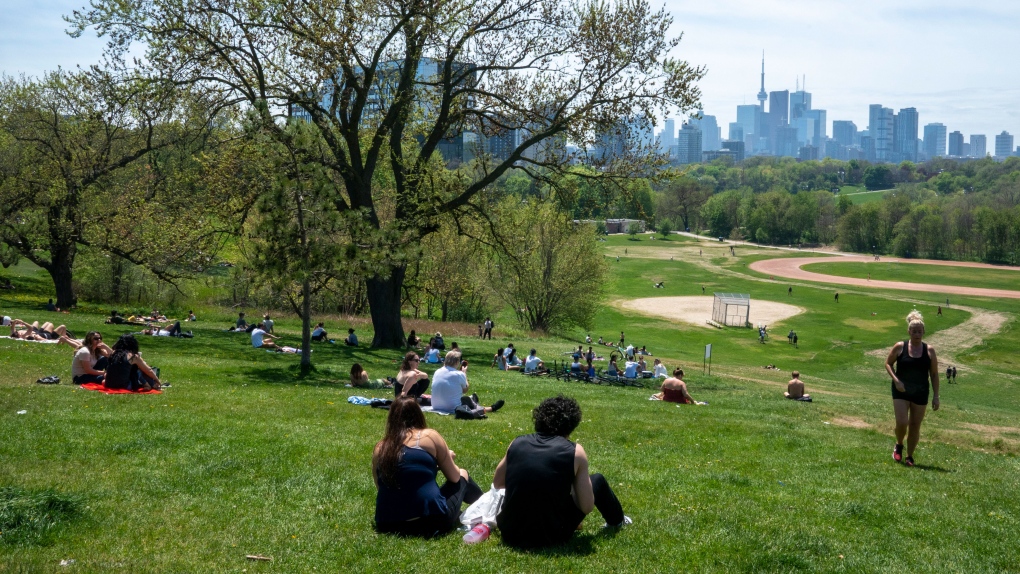 Park visitors soak up the sun in Toronto on Saturday, May 23, 2020. (THE CANADIAN PRESS / Frank Gunn)

TORONTO -- It appears the city will not be giving the green light to a proposed pilot project that would allow people to consume beer and wine in public parks and beaches this summer.

Coun. Josh Matlow pitched the idea to the city’s Economic and Community Development Committee but the motion was referred back to staff for further consideration at today’s meeting.

“The committee referred the motion back to staff with zero timeline for it coming back,” the Ward 12 councillor tweeted on Tuesday afternoon. “During this pandemic summer, the very time when we don’t want people congregating indoors, placing unreasonable restrictions on the use of our parks is inequitable & wrong.”

If approved, Matlow’s proposed pilot project would have run from May 21 until Oct. 31 and would have permitted members of the public to drink some alcoholic beverages in parks and at beaches with bathroom facilities between the hours of 11 a.m. and 9 p.m.

In a letter to the committee, Matlow said while council recognized the importance of being able to enjoy a drink outside by loosening restrictions on patios through the CafeTO program, some residents in the city can’t afford to drink at a bar and don’t have backyards or balconies.

“These residents should not be left with unsafe options such as gathering indoors or, like many over the past year, choosing to drink illegally in parks,” he wrote.

“Cities of similar size around the world including Montreal, London, Paris, and Sydney permit residents to drink in parks. In response to the pandemic, Vancouver approved drinking in 9 parks last year with many more scheduled to be opened up for alcohol in 2021.”

In Toronto, drinking alcohol in a public park is forbidden and anyone caught with an open liquor container could face a $300 fine.

Dr. Isaac Bogoch, an infectious diseases specialist and member of the province’s COVID-19 vaccine task force, said he was “disappointed” with the committee’s decision.

“Temporarily allowing alcohol consumption in parks is such a simple harm reduction approach,” he tweeted.

Mayor John Tory has previously expressed support for changing the bylaw but when asked about the issue earlier this month, he said he believes it is best to hold off on any changes until a full review can be conducted, likely after the pandemic is over.

“You know the real issue isn’t with people who have a glass of wine or a glass of beer in a park right now. I think you’d find most of the time that the enforcement officers have all kinds of other things to do than to focus on that. I think the real issue is people carrying substantial quantities of alcohol into parks and I’ve seen it with my own eyes - cases of beer, cases plural, piled up,” Tory said at a briefing at city hall two weeks ago.