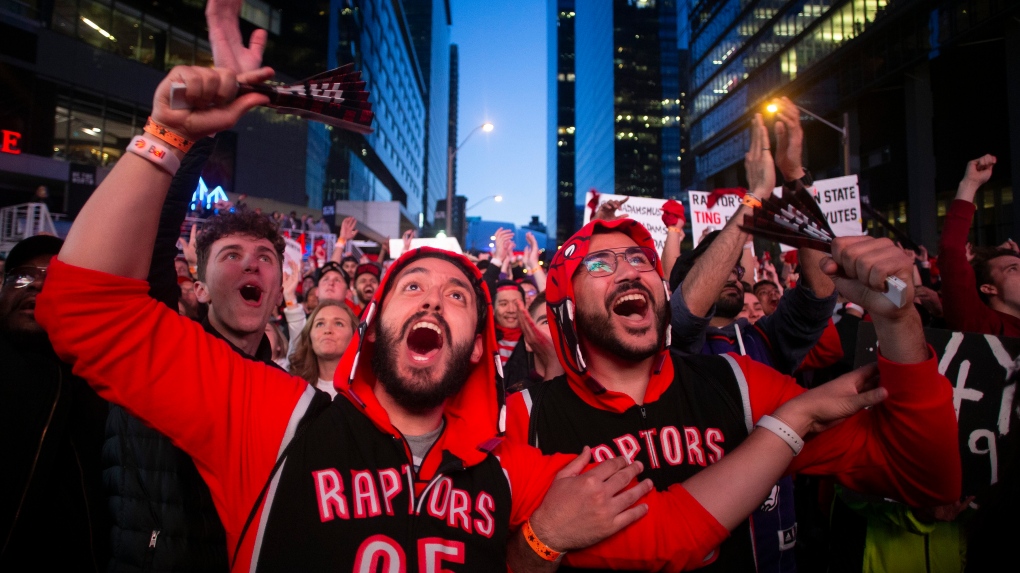 Toronto Raptors fans watch Game 2 of the NBA Finals between the Raptors and the Golden State Warriors in the fan area known as "Jurassic Park" outside Scotiabank Arena in Toronto on Sunday, June 2, 2019. THE CANADIAN PRESS/Chris Young

TORONTO -- The Toronto Raptors will have fans at their Florida home games this season.

The Raptors announced Tuesday they are permitting a limited number of fans at games at Amalie Arena, with plans to sell 3,800 seats for regular-season games but fewer than 3,200 for Friday's pre-season game against Miami.

There will be no floor seats available, nor any seats within 30 feet of the court. Seating will be physically distanced, fans over the age of two must wear a mask, fans must complete a health survey screening upon entry, and there will be cashless payments for parking and food and beverage services.

The Raptors said there will also be enhanced surface and air disinfection systems in place.

Due to Canada's COVID-19 travel restrictions, Toronto is the only team in the league that is playing at least the beginning of the season outside its market. Had the Raptors been permitted to stay in Toronto, current restrictions on indoor gatherings would likely have prevented them from having fans at Scotiabank Arena.

Florida has been a hotbed for COVID-19, surpassing 20,000 deaths on Monday. The Sunshine State has seen more than 1.13 million total cases since the outbreak began last March.

The Tampa Bay Buccaneers are allowing 25 per cent capacity at Raymond James Stadium (capacity: 65,890) for NFL games, which is the maximum allowed under NFL and CDC guidelines.

"In these unique and challenging times, the Raptors are grateful to be able to work closely with the NBA, the Lightning organization and local public health officials to create a safe opportunity for a limited number of fans to take in games," Tom McDonald, MLSE's vice-president of ticket sales and service, said in a statement. "As the Raptors call Tampa home for the start of the NBA season, the team looks forward to the opportunity to thank the community for their support while continually emphasizing the important steps required of all of us for a full return of fans when it is safe to do so."

Tickets start at US$30, and go on sale on Ticketmaster.com Thursday morning.

This report by The Canadian Press was first published Dec. 15, 2020.