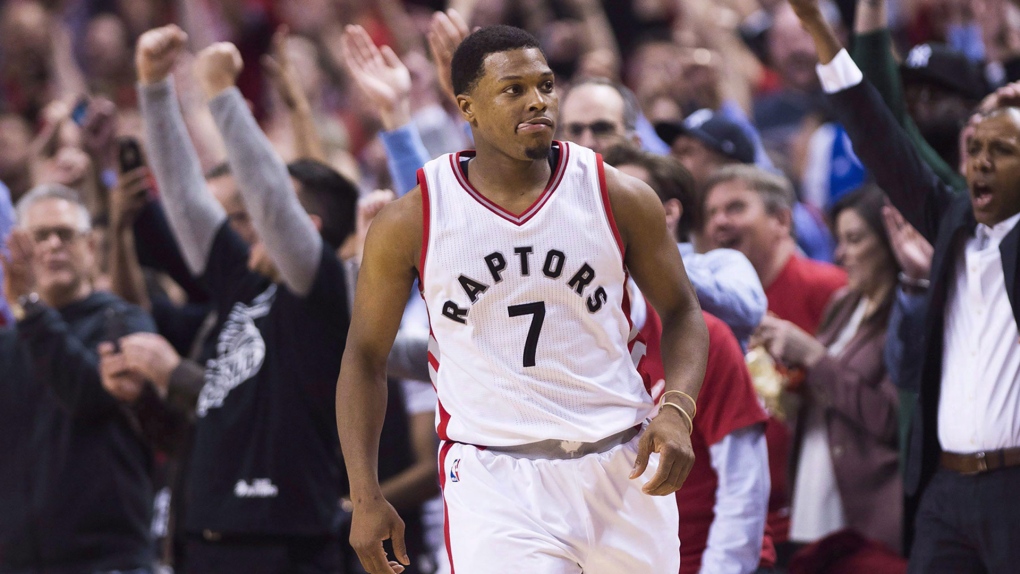 The crowd reacts after Toronto Raptors guard Kyle Lowry (7) sunk a basket in the last seconds of second half NBA playoff basketball action against the Milwaukee Bucks, in Toronto on April 18, 2017. (Nathan Denette/THE CANADIAN PRESS)

TORONTO -- Kyle Lowry drilled a deep three-pointer during the Toronto Raptors' second-half comeback on Tuesday, arching back and kicking up his heels as he launched it.

The all-star guard had a team-high five three-pointers in Toronto's victory in Memphis, a long-distance barrage that didn't surprise coach Nick Nurse.

"So that's one of the things I said to (Lowry) for the summer," Nurse said. "I said 'Work on your range man, because I want you to come down and start pulling deeper ones because it's not going to be so: 'What a horrible shot! Undisciplined basketball!' You know? Best team in the world, that's the way they're playing."

That would be the Golden State Warriors, who visit Toronto on Thursday in a much-anticipated matchup at Scotiabank Arena. The Warriors have revolutionized the NBA game, boasting shooting threats at every position. Thanks to Steph Curry & Co., chucking up long-distance shots is no longer frowned upon, Nurse said.

The Raptors had 18 three-pointers -- including 10 in the second half -- against Memphis.

Lowry's longest three Wednesday night didn't count. He drilled one for good measure from the Grizzlies' centre-court logo, after the referees had whistled a timeout.

Part of what makes the Warriors so lethal is their ability to crush an opponent's momentum with a big three-pointer. The rest of the league has followed suit.

"People are trying to do what they do, but nobody does it like them," Nurse said. "They still crush you with that 30-footer, and then another one. That spirit it takes away from you, the discouragement of playing so hard and well and you turn around and they throw in another 30-footer.

"You can see every team shaking their head like they just got punched off the ropes and they're trying to stay in the fight. Hopefully, mentally, we'll be strong enough to deal with that because it's coming. You're just going to have to take that little run of three or four threes that they make and keep on playing."

The Warriors are second in the league in three-point percentage, at 38.6 per cent. The Raptors' 33.5 three-point attempts per game is about four more than Golden State, but their 35.1 per cent accuracy ranks them 16th.