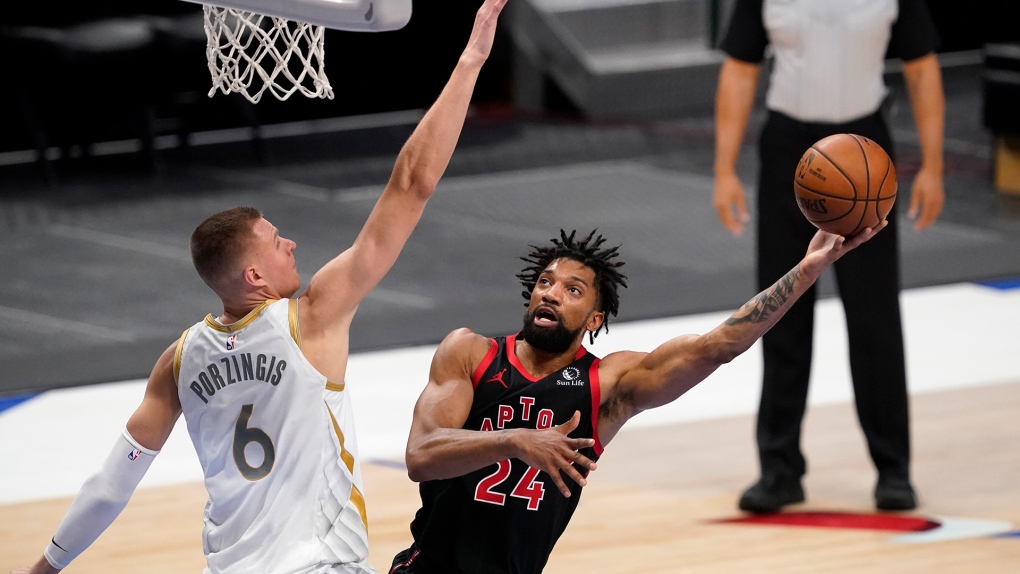 Dallas Mavericks center Kristaps Porzingis (6) defends against a shot by Toronto Raptors center Khem Birch (24) in the second half of an NBA basketball game in Dallas, Friday, May 14, 2021. (AP Photo/Tony Gutierrez)

The Montreal centre spoke to the media for the first time this season after Monday morning's shootaround, and said he and his family arrived in Toronto on Sept. 18, and within the week they had all tested positive for the virus.

“I lost my smell and a little bit of fatigue,” Birch said of his symptoms. “But I think I can come back. I feel good now. I think game shape is different, just not playing. We'll see tonight.”

The Raptors, who are fully vaccinated against COVID-19, hosted the Houston Rockets in a pre-season game Monday.

“We're all 100 per cent fully vaccinated too, so thank God,” Birch said of his family. “If we weren't it probably would have been worse.”

The 29-year-old Birch said his wife lost her sense of taste and smell while their daughter suffered no symptoms.

It wasn't the start to the season Birch had hoped for after signing a three-year US$20-million deal with Toronto in the off-season. Orlando bought out the Canadian late last season and he was impressive in his 19 appearances with the Raptors to end their 2020-21 season in Tampa, Fla., averaging 11.9 points and grabbing 7.6 rebounds a game.

Birch hopes he can bounce back quickly.

“I can probably feel good after tonight's game or (Tuesday),” he said. “I usually get in shape quick. Luckily, we have a whole week of practices before our first (regular-season) game. Right now I'm just gonna go out and play as hard as I can, not worry about the box score, just worry about getting the W.”

The Raptors are without fellow Montreal centre Chris Boucher, who had surgery last week to repair a dislocated finger. Pascal Siakam is recovering from shoulder surgery while Yuta Watanabe is sidelined with a calf strain.

Toronto hosts Washington on Tuesday to wrap up their pre-season. The Raptors open the regular season on Oct. 20 against the visiting Washington Wizards.

This report by The Canadian Press was first published Oct. 11, 2021.