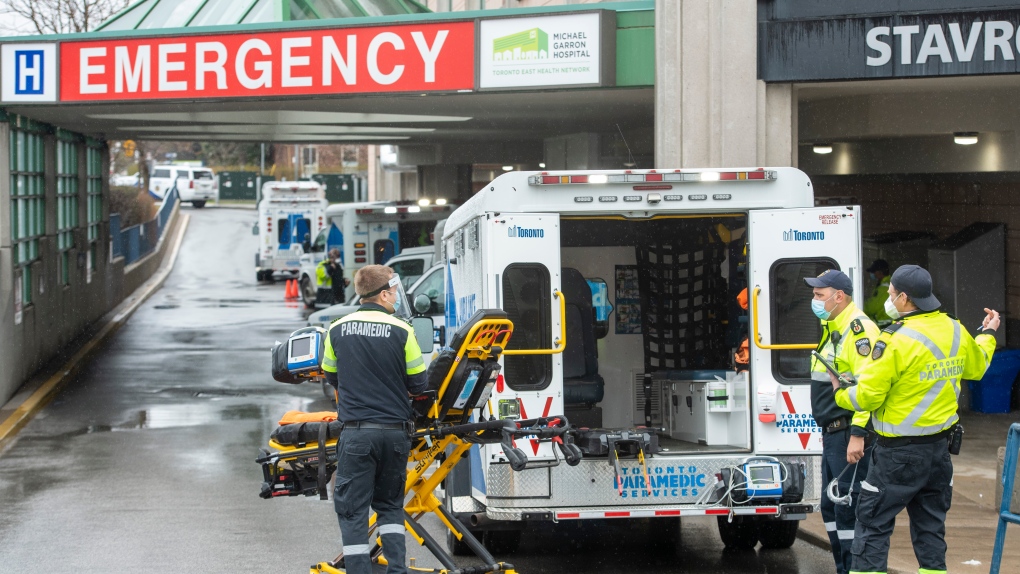 Paramedics and ambulances spill out of the Emergency ramp at Michael Garron Hospital in Toronto on Monday, April 12, 2021. THE CANADIAN PRESS/Frank Gunn

Toronto Public Health says that there has been a sudden spike in suspected overdose calls over the last week, raising concerns about the presence of “highly potent opioids” in the city’s unregulated drug supply.

Paramedics responded to a total of 108 suspected overdose calls over a two-day period earlier this week, three of which ended up being fatal.

On Wednesday alone, paramedics responded to 60 such calls, which is the highest single-day total since the city began tracking the data in 2017.

Toronto Public Health says that the overdoses appear to be occurring “across the city” and involve “a range of substances.”

“The use of highly-potent opioids – on their own or in combination with other drugs – may result in extreme sedation and dangerous suppression of the respiratory system,” Toronto Public Health said in a statement. “Since these drugs are so strong, the risk of overdose is increased, and greater than normal doses of naloxone may be required to rouse individuals experiencing an overdose.”

There has been an increase in suspected opioid overdoses since the onset of the COVID-19 pandemic with the average number of calls responded to by paramedics rising from 68 per week to 149 per week.

But the latest data seems to be pointing to a further acceleration, which has prompted Toronto Public Health to formally issue a drug alert warning of the possible presence of “highly potent nitazene opioids and benzodiazepine-related drugs in in samples expected to be fentanyl.”

“From November 27 to December 1, there were 10 suspected opioid overdose deaths attended by Toronto Paramedic Services, which is higher than average for a five-day period. These fatal calls occurred across Toronto,” Toronto Public Health warned. “While specific details are not yet known, there appears to be a range of substances from the unregulated drug supply involved.”

The warning from Toronto Public Health on Friday afternoon comes on the heels of police issuing a public safety alert on Wednesday regarding a “suspicious” drug that caused the suspected overdoses of five people in Parkdale.

Police also issued a public safety alert last weekend regarding another drug that had been linked to two deaths in Toronto's Deer Park neighbourhood.