TORONTO -- Blue Monday is considered the most depressing day of the year. And while it’s a promotional concept rather than scientific fact, one Toronto psychologist says it does have value when it comes to people checking in on their own mental health.

The third Monday in January, now known as Blue Monday, is when most people are just getting over holiday stress, when New Year’s resolutions may have been broken and when Christmas credit card bills start arriving.

As glum as it may be, the date has value according to clinical psychologist Katy Kamkar at the Centre for Addition and Mental Health (CAMH).

“If we are able to re-evaluate what are some of the key stressors in our life, but re-evaluate in a very proactive way, that helps us to feel more resilient moving forward. So it’s always a great time to check in,” Kamkar said.

Kamkar says people need to feel comfortable talking about their mental health and also be honest with themselves about how they’re really feeling.

Some signs of depression can include altered sleep and eating patterns, struggling to concentrate, a lack of self-confidence and even suicidal thoughts. Kamkar says if any of these symptoms last for two weeks or more, you should seek professional help.

To combat Blue Monday various office towers in Toronto’s financial district offered people a chance to play with some puppies.

The people doing the petting certainly appeared relaxed and were enthusiastic about the opportunity.

“It’s super cute that they do this,” Brianna Fijal said, who works at a downtown law firm. 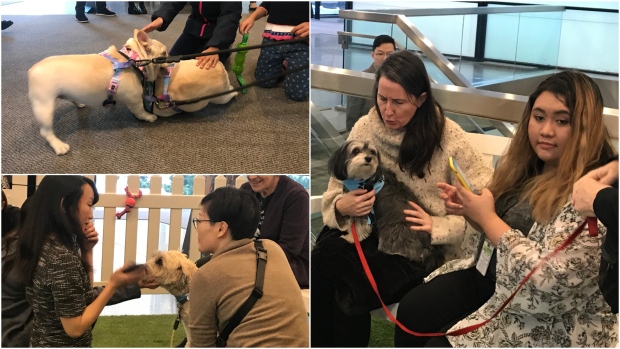 “We came last year, it’s so nice. I hope they do this at my work. I’m going to tell my work about this.”

Another man smiling while petting a pup was clearly enjoying the moment. “It’s a lot of fun, and I think it’s a good thing to do in the middle of winter just to cheer everyone up a little bit”

Kaufman said his therapy visits to Bay Street clients can have surprising results.

“We have CEOs coming up and crying with our dogs, and just letting their stress out. And just really being tactile with our animals. And they’re feeling much better by the time they leave.”

And while the vistors were reluctant to leave, they did so after snapping smiliing selfies with the pups and a warm feeling on an otherwise bitterly cold day.