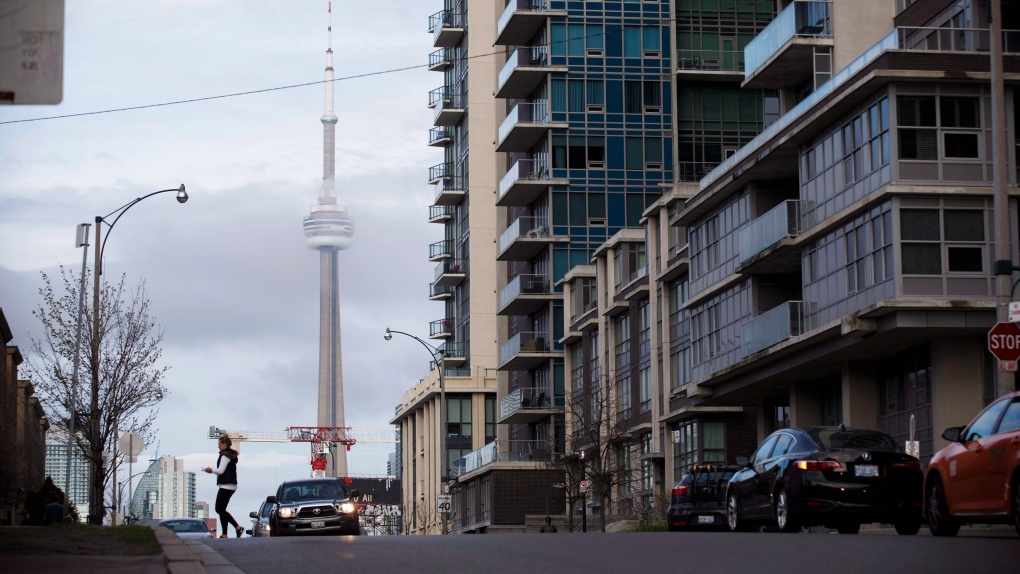 The CN Tower can be seen behind condo's in Toronto's Liberty Village community in Toronto, Ontario on Tuesday, April 25, 2017. THE CANADIAN PRESS/Cole Burston

TORONTO -- Activists and protesters gathered outside a Toronto courthouse this morning to physically block the city's rental enforcement units from conducting evictions.

The blockade, which began at 7 a.m., saw dozens of demonstrators occupy two ramps leading to the parking garage at the Superior Court of Ontario.

The event was organized by tenant advocacy organizations People's DefenceTO and Keep Your Rent Toronto -- both of which have been fighting efforts by landlords to evict tenants during the COVID-19 pandemic.

Kabir Joshi, an organizer with the two groups, said the demonstration was just one of an ongoing series of community-organized events to prevent property management companies from evicting vulnerable tenants.

"This conversation has been happening for six months," Joshi said, noting calls from housing activists to freeze rent payments going as far back as March.

"People who are just holding on by the skin of their teeth to continue existing in this city...this pandemic was gonna push them out."

The Ministry of the Attorney General of Ontario did not immediately respond to a request for comment.

Under the new law, landlords can offer a direct repayment plan to tenants who are behind on rent without going through the Landlord and Tenant Board.

The province has said the bill actually helps tenants, but critics and legal analysts have warned that the law would permit landlords to use a tenant's refusal to sign onto a repayment plan as justification to evict.

At the end of July, Toronto city council voted 22-2 to mount a legal challenge against the bill, citing concerns over the potential for vulnerable tenants to be coerced into a high-interest repayment plan or face eviction and potentially homelessness.

Paterson Hodgson, a tenant at Westlodge Towers in Parkdale and housing rights organizer, is not confident elected officials will make much of a difference in the battle against pandemic evictions.

"There's always opportunity for politicians to support their constituents, but in my relatively short life, I haven't seen them do a lot," she said.

"Community organizing, regional-based organizing is showing results that we don't get from politicians. We don't have to wait for them to step up, we can do it ourselves."

Although she hasn't been served a notice of eviction yet, Hodgson said she is currently behind on rent, and has repeatedly been asked to sign an unreasonable repayment plan by her landlord.

Hodgson, a work-from-home illustrator, said it has been difficult getting in contact with everyone in her building because of physical distancing restrictions due to COVID-19, but she believes dozens of her neighbours are in a similar situation.

She said eventually she may have to bite the bullet and move to a different city entirely.

"For me personally, being evicted would probably mean leaving Toronto."

This report by The Canadian Press was first published August 18, 2020.