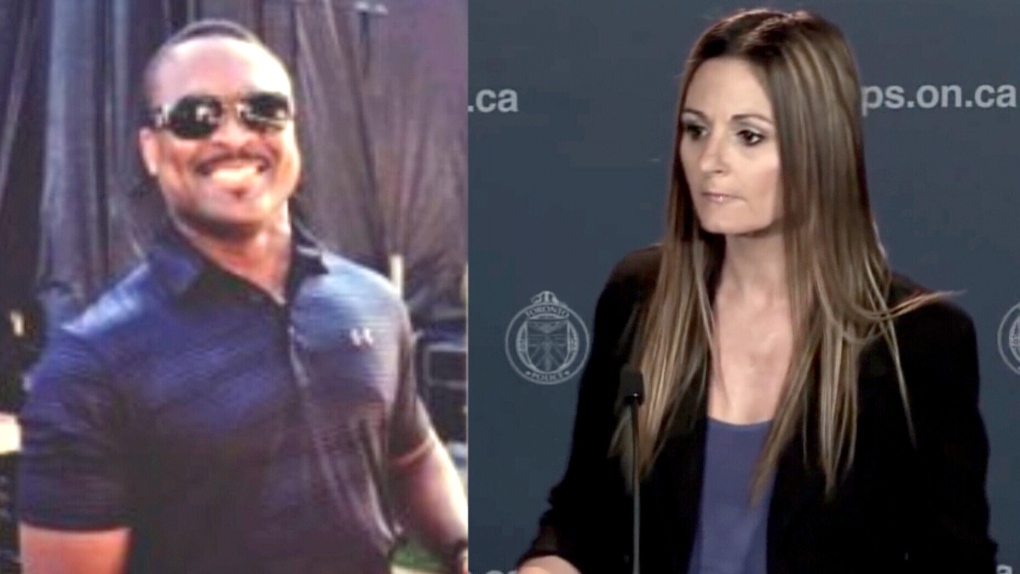 TORONTO -- A Toronto police officer who reported alleged sexual misconduct by a colleague has been disciplined because of some of the evidence she submitted to support her case.

An internal police disciplinary process ruled that Sgt. Jessica McInnis will lose vacation time because of her participation in a group chat that was found to contain inappropriate content.

That content is part of a sexual misconduct complaint McInnis made against a coworker, both internally and to the Human Rights Tribunal of Ontario.

McInnis alleges Det. Mark Morris sexually harassed her for several years by making lewd remarks about her in front of their teammates, asking her to send naked photos of herself, and repeatedly sending her explicit messages and images through both group and private text chats.

McInnis submitted copies of the messages as part of an internal disciplinary procedure, which found this week that McInnis engaged in "discreditable conduct" because she participated in the chat. She was docked eight hours of vacation pay.

McInnis' lawyer also contends she was punished for not reporting the messages sooner, a claim detailed in filings to the human rights tribunal.

Toronto Police spokesman Mark Pugash said he couldn't comment on the decision because the Police Services Act bars him from remarking on disciplinary procedures that aren't public.

Morris' lawyer, David Butt, called McInnis' allegations "either false or deliberately misleading," and said more information would be disclosed in the future.

Lawyer Barry Swadron, who represents McInnis, criticized police for penalizing a complainant on the basis of evidence she submitted to support her claim.

Against the backdrop of campaigns such as .MeToo and "Time's Up," which advocate for more support of women breaking silence over incidents of alleged sexual misconduct, Swadron said the force's approach is striking.

"It's like the Toronto Police Service is living on an island and is absolutely out of touch with what's happening in the world," Swadron said. "How do they know what's going through an individual's mind and the conflict a woman has in whether or not to come forward?"

According to McInnis' complaint to the rights tribunal, a pattern of alleged harassment began in 2014 when she was promoted to the rank of detective and assigned to work with Morris.

The alleged harassment became sexual in nature months later, she claimed, alleging Morris sent her more than a hundred "sexual" and "obscene" messages in both private and group settings over the next two years.

One message sent to McInnis alone sees Morris saying he was near her home and offering to stop by with "anaconda," a term used to describe his penis in multiple messages, the complaint alleged.

In another message sent to the team both he and McInnis worked on, Morris sent a link to a video depicting a scantily clad dancing woman, the document alleged.

"It's the black Jessica McInnis. I'd tap that," reads the alleged message from Morris, according to submissions.

In her rights complaint, McInnis said she frequently asked Morris not to send her explicit images or make comments she found demeaning, but alleges her requests were dismissed. She also contends she took her concerns to supervisors, most of whom sided with Morris and characterized his remarks as jokes.

Things came to a head in March 2017, according to the complaint, when Morris allegedly lunged at McInnis with closed fists in the presence of colleagues and screamed threats and obscenities at her, prompting a formal complaint.

The Professional Standards branch of the force began investigating Morris' conduct on that occasion and interviewed McInnis twice.

At the first interview in June 2017, McInnis said she presented some of the more explicit public and private messages she felt would back up her claim of ongoing harassment. The officer leading the interview "criticized" McInnis for failing to report the messages earlier, according to the officer's rights complaint.

Before her second interview, McInnis said she was told her own conduct was under scrutiny.

The investigator said McInnis was "implicated in the misconduct" because of a failure to report the messages immediately, and because of her occasional acknowledgment of and responses to them, the complaint said.

"My actions were dictated by the need to save face in a poisoned, sexist workplace environment and the very real and justified fear of workplace reprisals and violence and further harassment," McInnis said in her complaint.

Butt wouldn't comment on whether Morris faced penalties as a result of the disciplinary procedures. He said McInnis' allegations would be "vigorously contested."

"Detective Morris will respond in detail only in the appropriate legal forum," Butt said. "There is as yet nothing close to sufficient information on the public record to permit the drawing of either informed or accurate conclusions."