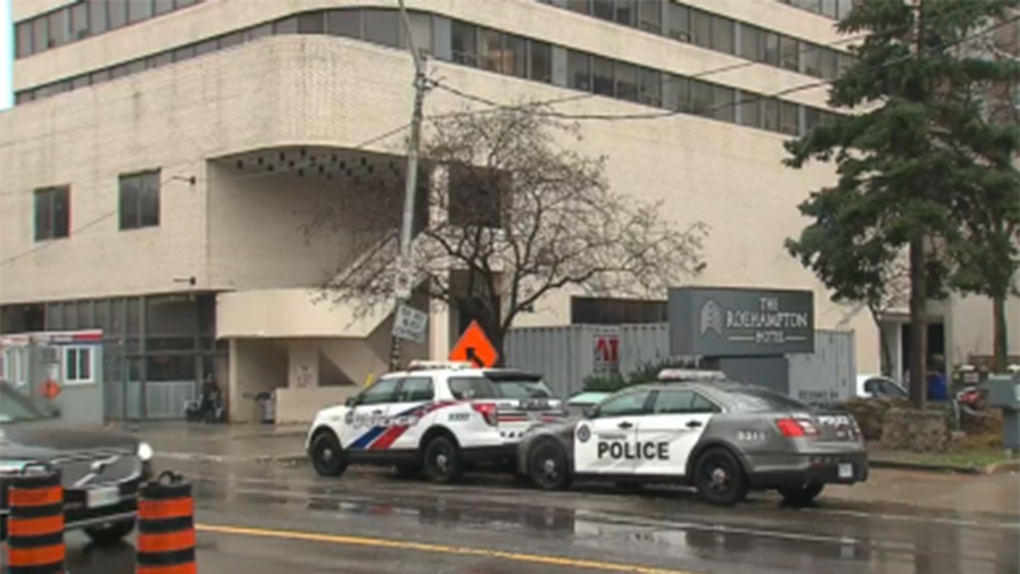 Police vehicles are pictured outside the Roehampton Hotel shelter in midtown Toronto.

TORONTO -- Toronto police are investigating a suspicious death at a midtown shelter opened to allow physical distancing for those who are experiencing homelessness.

Police and paramedics responded to a medical call at the Roehampton Hotel at around 5:30 a.m. on Dec. 2.

“Life-saving efforts were undertaken but the person was pronounced deceased,” Toronto police said in a statement. “At this time, the death is being treated as suspicious, an autopsy has been ordered, and an investigation is underway.”

The city began leasing the vacant hotel at Mt. Pleasant Road and Roehampton Avenue in the summer, opening up in July to provide around 174 beds to single adults and couples in an effort to allow for more physical distancing within the shelter system due to the COVID-19 pandemic.

According to the city, the site is staffed 24/7 with video security surveillance and two security guards on-site.

In a statement to CP24.com, the city said initial reports indicate the person died of an overdose.

“The City and staff at Shelter, Support and Housing Administration (SSHA) are saddened by the death of a client who was staying at the Roehampton temporary shelter. We are thinking of everyone who knew and cared for this individual,” the statement read. “We are awaiting confirmation from the Coroner’s Office but reports indicate so far that this was an overdose death.”

The statement from the city pointed out that Shelter, Support and Housing has been working with Toronto Public Health to expand harm reduction and overdose prevention supports in shelters, including recent investments at the Roehampton Hotel.

Those supports include naloxone kits and other harm reduction supplies, information about safe drug use and referrals to safe consumption sites and other support services.

Police did not identify the person who died or say why the death is being treated as suspicious.